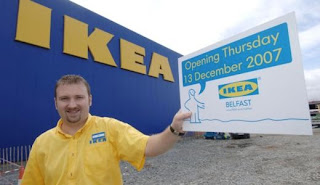 I had some relatives from the North visiting at the weekend. They were delighted to see Dublin looking well in the bank holiday sunshine - and appalled at the price of just about everything. Even allowing for the sterling/euro exchange rate (or maybe because of it these days).

How do you change an entire culture? Because that is the scale of what we are talking about here. The Northern culture, with its - er - Scottish influences, is one far more attentive to prices, value-for-money and budgeting in general. The Southern culture with its - you-would-nearly-think - Italian influences is generally far more relaxed about these things. I don't know whether it's because we in the South (I've long gone native, despite my Tyrone origins) are just less anxious about these things; or too 'snobbish' to be seen to be 'penny-pinching'; or we just think other things are more deserving of our attention. But whatever it is, we're paying a real and measurable price for it.

Still, I think there's a touch of horses-stable-bolted about the current agitation over rip off prices. Just look at what happened to the pubs when they got carried away with their 'price increase with every pint' approach to revenue maximization. Sales are down nearly 20% from their peak according to the CSO. Consumers may be slow to react, but they're not stupid. And nobody likes being treated like a fool.

Those retailers playing funny cross-border pricing games might just find themselves on the wrong side of the whiplash economy. As Habitat found out when IKEA opened at the other end of the M1. Even sheep have teeth.
Posted by Gerard O'Neill at Tuesday, June 03, 2008