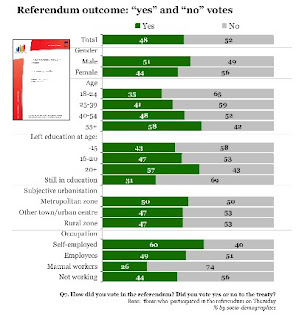 The women of Ireland exercised their alienable right to say No and caused the Lisbon Treaty to collapse. For now anyway. That's the findings of the initial results of the European Commission's survey of Irish voters about the recent referendum. The majority of men (51%) said Yes, but the majority of women (56%) said no - as shown in the chart from the Eurobarometer report. And so the referendum was lost.

This is hugely important. Of course the chart shows that large majorities young people voted No as did the working class. But neither group makes up a majority of the population: women, on the other hand, do. Women in general tend to be more worried about their financial situation, more worried about the consequences of immigration, and - lest we forget - they do more of the housework. Though I suspect Lisbon wasn't lost on account of the ironing ...

Those currently working on Plan B (or Plan C surely?) need to focus on the female factor. The women of Ireland will have to be persuaded to change their mind. Good luck to whomever draws that particular short straw.
Posted by Gerard O'Neill at Friday, June 20, 2008