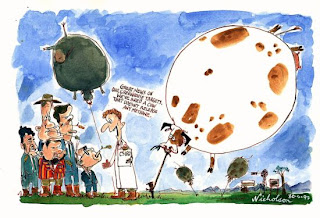 Under the radar of the Lisbon Referendum debate another, potentially more destabilizing debate has begun. It's the one about the Government's plans to meet our Kyoto target obligation by 2012. Or rather, it's about how we simply aren't going to meet the target and what it will mean.

Today's Irish Examiner carries a story not reported in any of the other national papers, namely that the Department of Finance are already saying that the 2012 target for emissions reductions will not be met - and that achieving the 2020 target looks even less likely. Indeed, one unforeseen consequence of a No vote next week may well be to create severe tensions between Fianna Fail and the Green Party: tensions that have been papered over somewhat in order to create a consensus on the Yes side of the referendum.

Minister John Gormley is already making noises about culling the national cow herd as a radical measure to meet our 2012 target. By about 50% according to some calculations. Something tells me this will not be an easy sell to the Irish Farmers' Association and the ICSFA. And it just might persuade some Fianna Fail backbenchers to push for Plan B: a coalition with Labour instead.

Where the Department of Finance might please the Green Party is through the introduction of a Carbon Tax. A recent paper from the ESRI sets out the case for such a tax, including how best to avoid any unforeseen consequences (like culling half the national herd). Though the ESRI doesn't see a carbon tax delivering the 2020 (let alone 2012) targets on its own, they do see one advantage for the Government: they might raise more taxes that way than through income taxes. They even suggest using the revenues from a carbon tax to reduce labour taxes - providing a net stimulus to economic growth. It's a well considered, mostly convincing argument.

There's only one major obstacle in the way of this happening, i.e.: reality. Introducing a tax that will raise energy prices when they are already rising at nearly ten times the rate of inflation would be a 'brave' thing to do politically. And that's the main problem: a carbon tax in Ireland will be an impossible sell for politicians, especially if no one else introduces it.

We could always ask the rest of the EU to join us in introducing a carbon tax: but should the No vote win next week I wouldn't count on a lot of warm feelings from our European peers for any tax ideas we might have. Indeed, they may well have a few ideas of their own about the taxes we pay.
Posted by Gerard O'Neill at Saturday, June 07, 2008