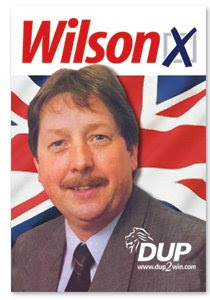 There are a few milestones in everyone's life when you find yourself thinking or saying something you thought you never would. Like when you hear yourself sounding like your parents as you're talking to your children; or when you see Neil Diamond performing and you think 'some of those tunes aren't bad you know'. And the real killer: when you're listening to Sammy Wilson from the DUP and you find yourself in agreement. Oh Lord not this one, please, not this one ...

Sammy has just been appointed Northern Ireland's Environment Minister and he has already incurred the wrath of what he calls 'green fanatics' by suggesting that jobs and the economy are just as important as the environment. And no, he wasn't referring to Sinn Féin. Here he was speaking after his appointment earlier this week:

As minister for the environment I've got a duty to ensure that there's a good balance set between the need to develop our economy, to provide homes, factories, roads etc and at the same time to protect the environment.

He also reflects a wider groundswell of opinion among European politicians that maybe they need to be more balanced about the economy/environment debate. Witness the decision by Italy to re-start its nuclear programme, and Germany's to stop the closure of its facilities. Morever, the 'OPEC tax' is already having a bigger impact than any proposed 'carbon tax', as illustrated by a 20 percent decline in petrol sales in the UK over the past 12 months and the rise of the 'hypermiling' movement in the United States.

I don't think our own Environment Minister John Gormley will be siding with Sammy any time soon mind. Only this week he gave his imprimatur to yet another department funded study that took the most extreme assumptions about climate change to generate the most extreme projections for Ireland and then call them 'scientific predictions'. Sounds more convincing than 'scientific conjectures' I guess. At least the IPCC had the integrity to call them illustrative marker scenarios, not predictions: because real scientists don't do 'predictions' for 50 or 100 year's time. They leave predictions to astrologers, charlatans and, er, politicians.