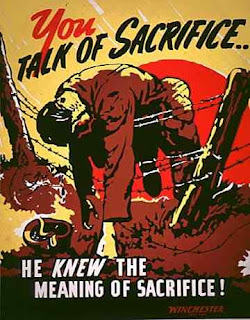 We're going to hear a lot more about sacrifice in the next few months; years even. The Government's increasingly dire situation regarding tax revenues (falling when they were budgeted to be rising) leaves two choices:

A third option is to do both - if things get back enough. And they may well get bad enough. Despite the OECD painting a relatively positive picture for the Irish economy in its forecast this week, things are already turning much more negative than they anticipated. Take interest rates: every single economic forecaster (even the gloomiest) has been projecting a cut in interest rates by the end of the year. But now it seems the ECB may well increase its interest rate - as early as next month. The timing of this could not be worse. Ireland faces an exchange rate/interest rate squeeze that will make the UK's ERM difficulties back in the early 1990s look like a mere prelude. And we know how that ended ...

Hence the need for sacrifice. I think our new Taoiseach Brian Cowen is a man who will not be shy about demanding sacrifice. Just read what he had to say in his inaugural speech on becoming Taoiseach:

One of the challenges we face today is to temper a rising tendency towards individualism within Irish society. We have rightly encouraged a culture of the individual taking personal responsibility for their own well being. We have reaped benefits from the more confident Ireland as presented by its most successful people forging new opportunities at home and abroad.

Overdone this carries risks. Not correctly harnessed this can sap the energy from our sense of community which is still strong and visible in so many ways. What we must prioritise is to turn the benefits of individual flair to the benefit of the community as a whole.

So can we expect a period of tension and strife in the public sector? I'm not so sure. A fascinating new paper from the University of Bristol on pro-social behaviour has found that workers in non-profit organisations (in sectors like healthcare and education) are more willing to do unpaid work than their equivalents in for-profit organisations. So maybe that is where Brian Cowen needs to look first as he demands sacrifice? Whether he will get it or not is an entirely different matter, of course.