A Woman's Work is Overdone 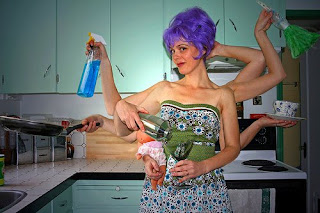 If ever there was a case for shutting down The Equality Authority it was the nonsense that they published last week about Gender Inequalities in Time Use. They took some old, previously published time-use data and got the ESRI to re-write it with an appropriate 'gender equality' spin. The ESRI really should know better.

The report purports to be a statistically coherent, independent assessment of survey data regarding how men and women divide up their time commitments (such as work and childcare) between them. But it is fairly clear from the start that this is not the intention: rather we are subjected to a tired rehash of that old canard about how "a woman's work is never done". Oh dreary me.

Fortunately the authors do at least have the integrity to present (almost) all the data needed to evaluate their claims. And quite plainly their 'men are all selfish bastards' spin simply falls apart with any intelligent, objective assessment of the data they present. The primary claim in the report is that women do more than their fair share of work when 'work' is defined as encompassing all 'committed time' activities including paid work and unpaid work - with the latter including childcare, household chores etc. They find that men on average spend longer doing paid work; women on average spend longer doing unpaid work. Big surprise, eh?

But here's the thing, Table 4.3 on page 33 of the report shows the authors' own estimates of men and women's time per average day on the main committed activities and guess what: there is no statistically significant difference! Men dedicated 7 hours and 47 minutes to committed time activities each day, women commit 8 hours and 14 minutes, and the difference is not significant to any statistical level (n.s.).

By the way, for those interested in the nitty gritty, 'unpaid work' as defined by the authors includes shopping. The authors find - hold your breath - that women spend far more time shopping than men. Now at the risk of sounding like a knuckle-dragging Neanderthal, I'm not entirely convinced that shopping is actually a 'chore' for women right up there with, say, getting the train to work on a wet, Monday morning. Perhaps the authors should get out a bit more? In fairness though they do admit on page 25 that: "Shopping is normally treated as unpaid work in studies of time use, however some distinguish shopping for food and shopping for leisure. Our data does not allow us to make such a distinction." Pity really, if they had separated out the shopping for leisure from the data for women would we have found that men's committed time was actually statistically higher than women's? We shall never know ;-)

Nevertheless you might think the authors would have packed it in and gone on to more useful things at this stage but no, instead we're subjected to fifty more pages of tortured efforts to nail men as the font of all misery for womankind in page after page of twisted interpretations of data to support a hypothesis that is already dead and buried on page 33. Next they turn to look at the behaviour of couples to see how bad it is for the average Irish wife married to the average Irish husband. But once again their very own data belies the hypothesis they are so desperately trying to promote.

According to Table 5.2 husbands have 7 hours and 59 minutes of committed time on an average day, wives have 9 hours and 26 minutes. Women are therefore responsible for 55% of committed time by couples. So it's a fair cop, right? Men make up 50% of the partnership but only do 45% of the work. But what exactly accounts for this difference (apart, one presumes, from innate male sloth and selfishness of course)? Table 5.4 presents a simple linear regression with total committed time (minutes) as the dependent variable and a list of possible explanatory variables with their coefficients and statistical significant shown in three columns. The first two columns are for husbands and wives, and the third is for the 'Gender Gap' between the two. And guess what - there is only one statistically significant explanation for the gender gap and that is the presence of pre-school age children (though even then, the overall explanatory power of the model itself is a rather dire, adjusted R-squared of .11).

So that's it, apparently the only source of significant 'inequality' in committed time between husbands and wives relates to the presence of pre-school age children. Still there is hope after all because children, eh, grow up and go to school. So the 'problem' solves itself. Again one might have expected the authors to make their apologies and leave at this stage for having lead us down a long cul-de-sac but no, the denouement is a long monologue in the Conclusion about 'what needs to be done about this terrible state of affairs'. No doubt with their paymasters in mind.

Here's what they have to say about the policy implications:

We would expect that policies to reduce paid work by men and increase their involvement in care should increase equality in the domestic sphere. Such policies would include paid paternity and parental leave and more flexible work options in male-dominated occupations. State support for childcare may not directly redress inequality in unpaid labour, but in allowing women to engage in paid work, where they choose to do so, will reduce the burden of care which falls on women.

That's right - they want us to re-engineer the labour market and the economy in order to solve a temporary problem whereby married women with pre-school age children have an hour and 27 minutes more committed time a day. Plainly the authors must have realised by this point that they were on a hiding to nothing because they were finally reduced to inventing a nonsensical PR factoid for the press release. They 'estimate' that because of the 39 minutes per day of extra committed time experienced by women then they are contributing an extra month of committed time a year compared to men. Only one problem with the factoid (that I care to point out): according to table 4.3 the difference is 27 minutes. But why let the 'facts' spoil a good story, eh?

Still, talk about much ado about nothing. If our Finance Minister is looking for a quick money saving measure then I'd suggest he takes a look at The Equality Authority with a view to releasing their talents back into the workforce.