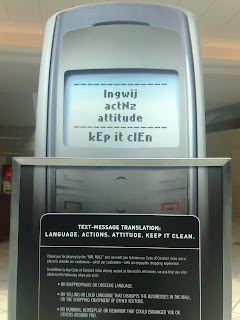 A friend of mine once said that everything you say about America is true, including the opposite. I'm in Massachussets on holiday and some of the contradictions are remarkable. American's do seem to like issuing instructions and warnings - 'the coffee in this cup is hot and could burn you' kind of warnings. Or the example in the photo that I took at the South Shore Plaza Mall in Boston today.

For 'The Land of the Free' (celebrating their freedom over the July 4th weekend just past) Americans do seem to impose a lot of restrictions on themselves. Take the local supermarket where I could get just about anything I wanted: except beer and wine because they don't sell alcohol. On the other hand, the instore branch of Citizens Bank was open - at 11am on a Sunday morning.

Like I said: lots of contradictions. But some of the contradictions are local rather than national, and some are just peculiarly American. Say, shopping centre security staff with firearms and the perennial America debate about the right to bear arms. It seems to me on my reading that the folks who drafted the constitution didn't have uzi-sub machine guns in mind, but I admit I'm not intimately familiar with the debate, and have no desire to do so.

But none of this is to indulge in the unfortunate tendancy of some of my fellow countrymen to deride and belittle all things American. Indeed, like most Irish people I have a great deal of affection for the United States and its people. If Failte Ireland could bottle and import their friendliness and courtesy for our own tourism industy it just might compensate for the effects of the euro/dollar exchange rate. Though probably not even that will help right now.

Better still, I do admire the way American's get focused on the solution rather than whinging about the problem. Take their economy and their stock market: the vibe here appears to be that the worst is over and that people just need to knuckle down and see things through. In marked contrast to the daily happy slapping the Irish stock market seems to be experiencing.

Maybe we could all do with a bit more American spirit - even with all the contradictions.
Posted by Gerard O'Neill at Tuesday, July 08, 2008