Born to Be Timid 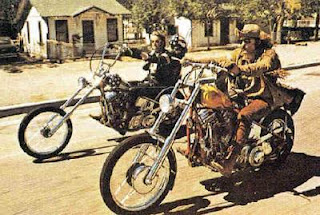 Get your motor runnin'
Head out on the highway
Lookin' for adventure
And whatever comes our way ...
Born to Be Wild, Steppenwolf

Sunday in brings out the 'Sunday drivers' - in , Mass it brings out the 'Sunday bikers'. The beach front attracts (mostly) middle-aged and older men (and their female passengers of a similar vintage) driving ludicrously loud and unweildy Harley Davidsons. The absurdity of the spectacle is made all the more pronounced by the nature of US speed limits. Driving in the is a stressful, distracting experience. And the distraction isn't the scenery (or even the Harleys), rather its the speed limit signs that seem to be located every few hundred yards, and which change regularly, even on similar stretches of road.

John Staddon (an Englishman living in the ) has written a good piece in the latest issue of Atlantic Monthly on the conterproductive nature of US traffic signage. He notes the problem of inattentional blindness, the effect of competition for the observer’s attention: by looking for one thing, we miss another that should have been obvious. And he draws on international data on road traffic accidents to show that the actually has a worse problem of traffic accidents than the (and, on some measures, ).

Maybe the should learn from the application of social psychology to road safety and lose the signs? But I suspect not - this is a country that does seem rather fond of warnings and instructions. I guess I'll just have to "head out on the highway, lookin' for the traffic cops ..."