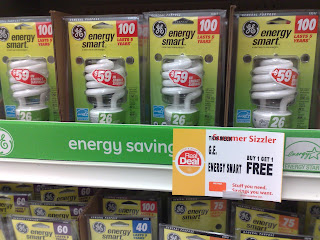 For some reason Hertz gave me a rental car with Pennsylvania number plates. But I'm staying in Massachusetts with the result on two occasions when I stopped to buy petrol (or 'gas') I was asked "how are gas prices out your way?" by different local drivers. I explained that 'out my way' was actually east, not west, and that where I come from we pay nearer $8 a gallon; not the $4 that has Americans so vexed! On both occasions they thought I was joking ...

Still, Americans do seem to be taking the energy challenge seriously: and responding as Americans often do - by shopping for bargains. I took the photo in my local Stop'n'Shop: it shows long life light bulbs on special promotion - the perennial 'buy one get one free' offer. I was impressed that the bulbs prominently displayed the expected savings in electricity costs the users could expect ($59). But what really impressed me was the price: $4.99 or $3.98 if you had a storecard. You get two for that price remember - so for the equivalent of €2.50 I could get two bulbs that would cost me €6-€7 each back home.

This is not to indulge in another whinge about rip-off Ireland, but rather to point out how remarkably capable the market in America is at providing cost-effective solutions to the rising costs of energy (household and transportation) that we all face. But transportation is the biggest challenge. Though making it easier to find oil is one response (opening up the national park in Alaska and off shore sites to drilling, for instance) it's clearly not enough (even if all the oil in Alaska's ANWR was available right now it would - by some estimates - fuel only six months of current US consumption).

The ultimate solution will be a mix of even higher gas prices, reduced travel, more public transport, higher density urban living, and energy innovation. Kind of like Europe actually. But not exactly like Europe - I've just finished reading Bruce Sterling's sci-fi novel Distraction set about 30 years in the future, and he has the main character Oscar say this about the (Native American) President in the story:

I'm a big fan of Sterling and I think he puts his finger on something peculiar to the American psyche. Sure it's a bit hyper and a bit naive - but it's also 'can do', not whiney. At the end of the day, the Americans will come with a solution that works for them - and with a bit of luck there'll be benefits for us in Ireland as well. We're very American in our current pattern of energy consumption as it is: so it'll be worth paying attention to try and avoid some of the grief ahead as we make the unavoidable adjustments that will be required to our own pattern of energy consumption. Including the light bulbs.
Posted by Gerard O'Neill at Thursday, July 17, 2008