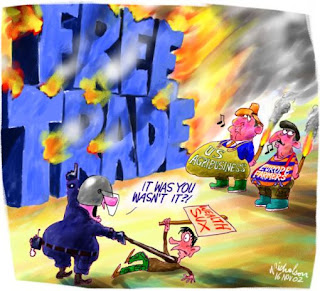 It seems that mirrors keep us honest. This from a fascinating article on mirrors in last week's New York Times:

Subjects tested in a room with a mirror have been found to work harder, to be more helpful and to be less inclined to cheat, compared with control groups performing the same exercises in nonmirrored settings. ... people in a room with a mirror were comparatively less likely to judge others based on social stereotypes about, for example, sex, race or religion.

“When people are made to be self-aware, they are likelier to stop and think about what they are doing,” Dr. Bodenhausen said. “A byproduct of that awareness may be a shift away from acting on autopilot toward more desirable ways of behaving.” Physical self-reflection, in other words, encourages philosophical self-reflection, a crash course in the Socratic notion that you cannot know or appreciate others until you know yourself.

It's one of those delightful studies into brain/behaviour interactions which changes how you think about your own behaviour. The field of neuroeconomics is one I've blogged about before, and those of you new to the topic can get a great primer over at this week's Economist.

The mirror study got me thinking about its wider economic implications. Take trade, for example. What is trade if not a way of holding up a mirror to society? Our trade with others tells us much about ourselves: not just about what we can create that others want to buy; but also about our self-image and willingness to engage with the world and have the world engage with us. More importantly, as explored brilliantly in Paul Seabright's book The Company of Strangers, trade keeps us honest - otherwise people won't trade with us again - and keeps us peaceful (it's not good business to kill your customers etc.).

Which is why the failure of the Doha round of trade talks at the WTO is really bad news. Fear has triumphed over hope, and the vested interests of the affluent few have overridden the dreams and ambitions of the impoverished many. The mirror that is trade has been smashed, and there is no reflection to show the ugliness of protectionism and zero-sum gamesmanship now unfolding.

But we can't give up. We've come so far as a species, creating a world of unprecedented wellbeing and peace for billions of people, to simply regress to a world of beggar-thy-neighbour politics. Economics itself has moved on, and there is a far greater sense of the importance of free trade than was the case 100 or even 50 years ago. Even broken pieces of a mirror still show our reflection.
Posted by Gerard O'Neill at Tuesday, July 29, 2008