In Denial About Climate Denial 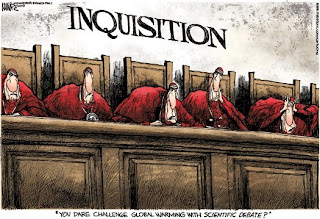 Poor William Reville, occasional science writer for the Irish Times. He wrote recently that the attitudes of some environmentalists reminded him of religious fundamentalists. Nearly as bad as the Pope accusing some Muslims of having a propensity to use violence. Needless to say Reville's comments provoked a furious response (though not quite as extreme as the Pope's) - not unlike those of, er, some religious fundamentalists (of a Muslim or Christian orientation, we're an equal opportunity offender on this blog ;-).

Dr Reville isn't anti-green or - worse - a climate change denialist (the new Satanists in the Green panoply of eco-heaven and hell). He just argues for common sense:

The green movement draws attention to important issues that everyone must take seriously and it has played an important role in galvanising action from mainstream politics. But many green interpretations and solutions are largely intuitive and some have little scientific justification. Take the notion of the idyllic state in which simple pre-modern societies lived/live in nature. This is simply a myth, as anthropology confirms. Inter-tribal warfare, intra-tribal murder and violence were and are commonplace. Also, what is idyllic about an 80 per cent infant mortality rate and complete vulnerability to disease?

But common sense upsets some folk it seems. Still, I have immense faith in the common sense of the Irish people. In the recent Eurobarometer of EU citizens' main concerns, only 4% of Irish people thought that protecting the environment was one of the two most important issues facing Ireland at present (see page 76: the EU27 average is 5%, by the way). The environment is on the list: just nowhere near the top.

This must be terribly frustrating for those of a green fundamentalist bent. Especially when their colleagues are spending €12.5 million of taxpayers' money trying to persuade the taxpayer to Change their behaviour. And there's the problem: people think others should change - not them. The Change campaign's own research shows that the majority of Irish people disapprove of a range of potential initiatives such as raising taxes on coal, gas and heating oil (see slide 23). But they're happy to see people in SUVs pay more. I'm guessing most of those approving don't drive SUVs ...

This is not to say that keeping people fully informed about the environmental consequences of their private choices isn't worthwhile. Of course it is: a better informed decision is usually a better decision. For example, research shows that consumers are more likely to change their behaviour in response to energy and recycling labels on products than, say, organic and fair trade labels.

But for a climate agnostic like me (and Dr Reville), I take heart from the refusal of the Irish people to be browbeaten into eco-guilt and shame, despite the earnest proselytizing of the Green faithful.
Posted by Gerard O'Neill at Saturday, July 05, 2008