In Praise of Inflation 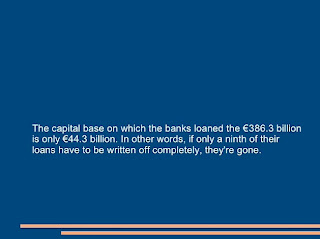 Unfortunately I had other commitments and couldn't get along to Richard Douthwaite's talk at the Feasta Seminar Series last week. Richard is undoubtedly one of the most interesting economists in Ireland today. He has written and edited a number of insightful books, including The Growth Illusion and Growth: The Celtic Cancer. As you'll have figured from the titles, he's not quite the stockbroker economist type.

But what Richard lacks in orthodoxy he makes up for in originality. Which is good enough for me. You can catch his talk last week online: well worth watching. One of his slides (image above) caught my attention: the capital base of Irish banks relative to their loan book is less than a ninth of the total. So a bad debt ratio of just over 10% 'wipes out our banks and wipes out our savings' as he put it in his talk. It certainly got my attention.

Richard's prescription is as radical as his diagnosis is gloomy: the Irish economy needs a sustained bout of inflation to tide us over as we transition to a new energy era in which energy is much more expensive relative to labour (rather than vice versa, as it has been until now). But to instigate such a deliberate, 'benign' inflation (as he puts it) will only be facilitated by Ireland leaving the euro and reinstating our own currency. He thinks we should go further and introduce regional currencies to allow different parts of the country to adjust as appropriate to the challenges ahead. Like I said: radical.

I don't agree with several aspects of Richard's analysis: I think he understates the impact of inflation, especially on those on fixed incomes such as pensions - though he does acknowledge this. I also think that he overstates the personal debt problem since much (though by no means all) of this was invested in income generating assets - such as commercial and private rented property - that will provide an income to fund interest and capital repayments. Also, a relatively under-developed economy like Ireland's was 10-15 years ago was inevitably going to experience the kind of borrowing/investment surge we have witnessed; so it is a transition and will pass as the economy matures.

Furthermore, I think he makes a good case for an old fashioned gold standard if you follow his reasoning: though he would probably deny this. Still, I do admire his originality, and I have no doubt that the challenges we will face - including those set out in Richard's talk - will demand something like the imaginative and brave responses that he advocates. I am glad that we have people like Richard focusing on solving our problems - he will undoubtedly play a part in creating effective solutions.
Posted by Gerard O'Neill at Friday, July 04, 2008