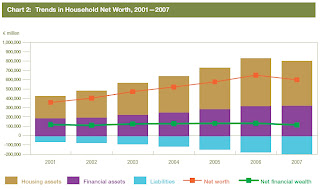 As I've mentioned before, we are going to be breaking all records for the numbers laid off each month for some time to come because we have a record number of people in jobs. Something that never, ever gets mentioned when the latest 'shocking' increase in the live register is announced. Nor is it ever mentioned that the latest unemployment rate (5.9% in July) is:

a) below the EU average below (and expected to remain so - see table on page 34 of pdf), and

And yet it seems to be the unemployment trend that has spooked Irish consumers. I say 'spooked' because the reality, to repeat myself, is that the overwhelming majority of people in work are not at risk of being made redundant. Nor will they be. So it seems as if we are gripped by what an advisor to John McCain called (controversially) a 'mental recession'. I think he's right: the whiplash plunge we have seen in Irish consumer confidence and in retail spending suggests panic rather than plunging incomes. The same appears true of the EU as a whole, where confidence has fallen this month as sharply as in the aftermath of 9/11. Except there hasn't been a 9/11 ...

By the way, Ireland is now the only country out of the EU27 not publishing comparable consumer and business confidence data since April. I think it's a disgrace - yet there hasn't been any media coverage of this development.

One other thing pointing to our mental recession is the fact that there appears to be no significant connection between falling house prices and consumer spending. A fascinating paper on The Impact of Asset Price Trends on Irish Households (pdf) published today by the Central Bank does show that household net worth fell by 8% last year. Having risen by 82% in the preceding five years. See chart at top of post. Yet the Central Bank's analysis essentially shows that this has not had (and most likely will not have) any adverse impact on consumer spending.

So here's a thought: might the suddenness of the slowdown in consumer spending be a precursor to a sharper than expected bounce back in early 2009? Once people get over the gloom of winter and the most depressing day of the year? We shall see.
Posted by Gerard O'Neill at Thursday, July 31, 2008