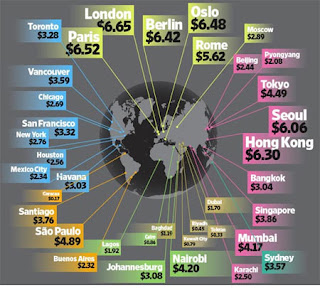 Willem Buiter has a great post over at Maverecon about the prospect of $500 oil. Fundamentally his views on the outlook for energy prices in general and oil prices in particular are the same as my own: as demand rises and supply declines then there's only one way for price to go in the long term.

One of the comments on his post makes the point that economic history has been an ongoing battle between the forces of Adam Smith and Thomas Malthus. The latter famously described a future in which the rate of population growth would inevitably outpace the growth of resources leading to a future of mass poverty. The former, on the other hand, foresaw a future in which the market mechanism would provide the means whereby individual effort and genius would create collective benefits sufficent to offset any resources constraints.

And so the battle continues - indeed, it may be hotting up. Driving around New England I am struck by the radio and press coverage given to the cost of petrol - or gas, as they say. Of course, coming from Ireland I am also struck by how cheap petrol is here - at just half what we pay, and many others as the graph illustrates. But that isn't how Americans see it, and, as ever, they're working on how to fix the problem.

One recent phenomenon has been the growth in demand for public transport - reversing a half century long trend in this part of the world. For example, in nearby Boston, use of the subway is up 9% on a year ago. It seems Americans are looking to Europe's success with public transport (especially trains) as a guide to future policy choices - especially if Obama becomes President. Though somehow I don't think they'll be including Ireland in their itinerary should they visit Europe on a fact finding mission ...

Nevertheless, if I had to place a bet, I'd wager my appreciating dollars on Smith any time.
Posted by Gerard O'Neill at Wednesday, July 09, 2008