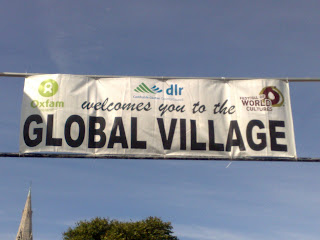 The foreign isn't foreign any more. That's what struck me this morning at the Global Village, part of the Dun Laoghaire Festival of World Cultures. There were people from all of the world moving from stall-to-stall buying and selling goods from all over the world. There was the Indian stall, the Kenyan Stall, the Slovakian Stall and so on. In this morning's sunshine it really did seem like world peace had settled on our tiny corner of south Dublin for a brief few hours. And what united us was free trade: people selling stuff from other countries in the hope of making a profit. Make trade not war, indeed. The way it should be.

But what also struck me was how difficult, if not impossible, it would be to organise a similar 'global village' in so many of the countries represented in Dun Laoghaire today. Tibet, Palestine, and Iran for example. The contrary thing about a 'festival of world cultures' is that it can only be held in a country that is not so hung up on its own culture to the exclusion of others. Like it used to be in Ireland not that long ago (think censorship). We have gotten used to things 'foreign' in our own midst. And I think we're better for it (as do most people I reckon).

The irony is that celebrating difference is in danger of leading us to enforce difference. I fear that the benign intentions of multiculturalism my well lead us down this route. As observed in this delightful essay from the superb Butterflies and Wheels website:

Modern multiculturalism seeks self-consciously to yoke people to their identity for their own good, the good of that culture and the good of society. ... An identity has become a bit like a private club. Once you join up, you have to abide by the rules. But unlike the Groucho or the Garrick it’s a private club you must join. Being black or gay, the philosopher Kwame Anthony Appiah suggests, requires one to follow certain ‘life-scripts’ because ‘Demanding respect for people as blacks and gays can go along with notably rigid strictures as to how one is to be an African American or a person with same-sex desires.’ There will be ‘proper modes of being black and gay: there will be demands that are made; expectations to be met; battle lines to be drawn.’ It is at this point, Appiah suggests, that ‘someone who takes autonomy seriously may worry whether we have replaced one kind of tyranny with another.’ An identity is supposed to be an expression of an individual’s authentic self. But it can too often seem like the denial of individual agency in the name of cultural authenticity.

There is a double irony here. The only people in the end free to be whatever they individually want are those from the 'dominant' culture: white, English-speaking Europeans in the case of Ireland and the UK. We get to shop the world. But the other irony is that it is the liberal tolerance of white Europeans that risks exposing those previously under the yolk of repressive cultures (gays and other previously 'outlawed' groups) to yet more repression. First they came for the Christians ...

So I take my cue from the name of one of the fringe events at the festival called Beyond Harmony. It's all about fusion of East and West etc. We have to move on from the 'United Colours of Benetton' wishful thinking to far more practical solutions to the tensions differences give rise to. Like I saw in the Global Village today.
Posted by Gerard O'Neill at Sunday, August 24, 2008