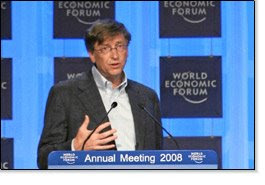 Bill Gates has started an interesting discussion about the role of business with his talk at Davos earlier this year.

I've just been reading some of the posts at the Creative Capitalism blog inspired by Gate's talk (thanks to Stephen Kinsella for the link). The plan is to use the dialogue between contributors and commentators to ultimately produce a book on the subject.

There are some excellent contributions by a 'whose who' of economics - well worth a browse. I especially like Paul Ormerod's contribution citing Hayek. He notes:

First, I am an unequivocal enthusiast for both capitalism and liberal democracy. Second, like Professor Easterly, I regard Hayek as being, by some margin, the greatest social scientist of the 20th century. The research agenda for the 21st century is dominated by his insights.

But capitalism is not the same as unrestrained free markets, mediated neither by formal regulation nor by informal norms. And a key insight of Hayek is that we make progress not by the ‘rational’ analysis of the central planner, but by experiment and evolution.

I think this is how we should see Mr Gates’ suggestion. It is an idea which is intended to bring benefits. Like most things, it is likely to fail, but until it is tried we will not know.

The Hayekian view of the world is completely at odds with the view that we should never do anything which might interfere with the Platonic idea of markets found in economic theory. We experiment and see what works. Capitalism comes in different forms. Yes, America is the most successful, but the pinko Europeans in Germany, France, Sweden – each with its own particular variant of capitalism - have not done too badly either.

... I am sceptical about a lot of what goes on under the heading of corporate social responsibility. And I am particularly wary of the central planning mentality that often goes with it: the belief that sufficient data and sufficient research will enable us to guarantee the success of a particular measure - the triumph of hope over the experience of ages. But the Hayekian process of evolution will eventually find this wanting. We've known since Adam Smith that we do not have to intend good in order to achieve good. But in the meantime we might, just occasionally, want to intend good.

He's right, of course. The true essence of capitalism is a willingness to experiment, and a readiness to fail. The obverse of policy making unfortunately - which is usually more concerned with avoiding risk and demonstrating success (even in its absence). Which is why creative capitalists will raise the next billion out of poverty, as they have the last billion.
Posted by Gerard O'Neill at Friday, August 22, 2008