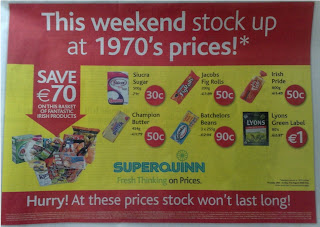 We got new bedroom curtains the other day. I use the royal we of course. Personally I thought the ones we had were grand - sure, they were about 15 years old, and a little faded, but when you pulled them they kept the light out just the same. We decided to get new ones anyway ...

I got chatting to the man who was putting up the curtains, though he seemed very busy - fielding calls on his mobile from other customers wondering where he was. I told him I was amazed at how much demand there seemed to be for new curtains given all the talk about recessions etc. "God bless the women of Ireland" was his answer, "sure if it was up to the men they'd all be using black bin bags."

He has a point: it's the women of Ireland who do most of the shopping, and it on their demands and intentions that the fate of the economy rests for sure. Coming to the end of our 'summer of discontent' I see a few green shoots of potential recovery in consumer spending (sorry for the confusing seasonal metaphors there). The latest ESRI consumer confidence data reveals a more positive outlook about pricing trends and the current buying climate in August.

This is being driven by the increasingly intense competition between supermarkets, as evident in the latest round of newspaper advertisements. The image is from today's Irish Times - Superquinn are running a promotion selling selected stock at 1970's prices. Might not be long before we have deflation rather than inflation if that trend continues. Though I'm not so sure about the impact of 1970's imagery on the shopping public. Bear in mind, 44% of the Irish population weren't even born in the 1970s ...

It isn't just grocery prices experiencing deflationary pressure. The same issue of the Irish Times carries a story of a Northern Ireland builder who sold out a new development after running an advertisement stating: "We give in! We're finding it tough to sell. So let's cut to the chase with an offer you can't refuse." Some of the houses saw their prices cut by nearly a third.

Which just goes to show that the price mechanism works, and that consumers do respond to price incentives by spending their money. Schumpeter put it better:

The capitalist achievement does not typically consist in providing more silk stockings for queens but in bringing them within the reach of factory girls in return for steadily decreasing amounts of effort.

Same goes for curtains I guess. God bless the women of Ireland - including the factory girls.
Posted by Gerard O'Neill at Saturday, August 30, 2008