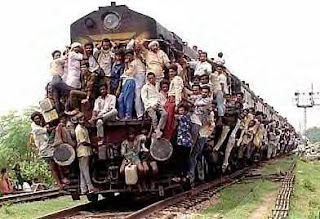 The latest population forecasts from Eurostat (pdf) are fascinating. Though most of the headlines have focused on the projected 6.8 million people living in Ireland by 2060, it is the assumptions behind the forecasts that are most interesting. A 53% increase does seem like rather a lot, and naturally we wonder where they'll all fit in. The photo shows the 07.50 Adamstown to Heuston train circa 2058 ...

But of course the forecasts are only projections - little more than extrapolations of recent trends a long way into the future. I don't buy them: trying to call Ireland's demographic profile in 2060 is as challenging as forecasting today's population profile from way back in 1956. I doubt if the folks back then foresaw an Ireland with more native Polish and Mandarin Chinese speakers than fluent gaelgoirs. More to the point, even with a 50% increase in our population density we will still have one of the lowest densities in Europe.

What's more, the Eurostat projections assumes a further rise in immigration: over a third (36%) of the projected rise to 6.8 million is based on immigration (net) - exactly twice the projection for the EU27 as a whole (18%). Again, this is an economic projection more than a demographic one, and as Garret Fitzgerald points out in today's Irish Times, our own indigenous population growth will significantly reduce the need for immigration beyond 2030.

A far more pressing issue I suspect will be the growing demographic and economic imbalances at a regional level in Ireland. There you're talking politics, not just demographics.
Posted by Gerard O'Neill at Saturday, August 30, 2008