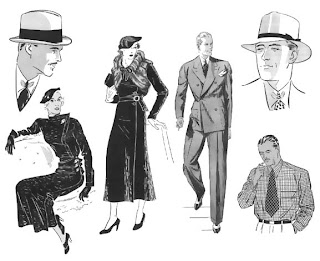 Someone joked recently that you couldn't possibly compare the present recession to the Great Depression of the 1930s because people were better dressed back then ...

He has a point: as an amusing article in the Daily Telegraph recently lamented, now that higher standards of living and low prices mean we can all afford to wear decent clothes, why do most of us dress like slobs? Though The Daily Telegraph and Adbusters are not exactly ideological bedfellows, there is an interesting synergy between the weary lament in the Telegraph and a darker perspective in a recent Adbusters commentary. Writing about the Hipster youth culture, the writer argues that we have reached the point in Western Civilisation where counterculture has evolved into a self-obsessed, aesthetic vacuum:

We are a lost generation, desperately clinging to anything that feels real, but too afraid to become it ourselves. We are a defeated generation, resigned to the hypocrisy of those before us, who once sang songs of rebellion and now sell them back to us. We are the last generation, a culmination of all previous things, destroyed by the vapidity that surrounds us. The hipster represents the end of Western civilization – a culture so detached and disconnected that it has stopped giving birth to anything new.

But of course culture doesn't stand still. The joke in some (casually dressed) workplaces is that when a colleague shows up in a suit then he (or she) is going for a job interview somewhere else. Maybe a good recession will do wonders for our collective dress sense?
Posted by Gerard O'Neill at Tuesday, August 05, 2008