The Future is What Artists Are 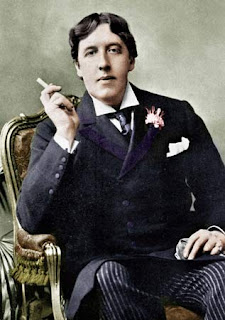 Oscar Wilde's essay on The Soul of Man Under Socialism is written in his usual literary, poetic style. I first read it years ago, and one of his lines struck me as radically prophetic:

At first glance his 'forecast' seems absurd: artists as the future. Really? I was reminded of Wilde's prophecy recently by a similarly poetic essay by Frederick Turner on Abundance and The Human Imagination. I urge you to read it. Turner's essay is simply one of the most inspiring commentaries on humanity and our future that I have come across in some time. His argument essentially is that much of the nihilism reflected in modernist art and culture was an artistic reaction to the deathly reductionism of 19th and 20th century science:

Artists rejected the fecundity and abundance of nature partly because, so it seemed, science had shown it to be a fraud and a cause of delusive hope. If the universe is on the whole a spring that is relaxing, an engine that is running down, a fire that is burning itself out, then the richness of living creativity is merely an eddy in the general current, a chance and temporary reversal in the fated descent into decay and mortality.

But, as Turner points out, 21st century science is framed by a very, very different paradigm:

Entropy has been entirely reconceived by information science. It now appears not to be a measure of decay and death, but rather a natural explorativeness of possible information-states that is happily used by living and non-living systems as a free computational device. Evolution uses entropy to explore possible new life-forms, just as markets use it to construct a pricing system and explore the viability of new technologies. Information—the stuff of our lives and experiences—does not die when it rushes away from us in the form of dead skin DNA, sound waves, gravitational vibrations and light; it is still there, fleeing outwards from the planet, to be collected perhaps by some black hole and preserved at the surface of its event-horizon until Brahman blinks, Gabriel blows his horn, the black hole evaporates and it all begins again.

His delightful play of science, philosophy and poetic prose certainly makes his point: physics, evolution, astronomy and even psychology tell us we live in a world, indeed an entire universe, characterised not by scarcity and loss but by abundance and recuperation. As Meg Wheatley puts it: life wants to happen ...

One last quote from Turner, which I couldn't resist, as he speculates about a future perceived as abundant:

In economics, we are recognizing the exponential power of markets to generate wealth. Now that we have a global economy, the wealth of the average individual person on this planet doubles every twenty years or so, and our average life-expectancy is now doubling every century. As old languages are forgotten, new ones are being created every year. The old metaphors of growth, birth, fecundity and abundance now seem to make more sense. The world is not a zero-sum game, but rather a great cascade of gifts; if we lack for anything it is because of a lack of knowledge, not an unavailability of goods. Our problems are those of cash flow, scheduling, bottlenecks and distribution, so to speak, not of the basic health of the balance sheet. We are threatened not by scarcity but glut. If we did not get in each others’ way by bad and over-controlling governments and ideas, we would all be rich.

Not bad for a Professor of Arts & Humanities.

So is the future what artists are? Certainly Turner expects a new, more positive, more glorious artistic turn as the new scientific memes work their way through society and culture. In one sense he anticipates a developmental shift in our cultural zeitgeist. It is as if we are progressing through Erik Erikson's Developmental Stages as a society, emerging into Middle Adulthood and the rich potential for what Erikson called Generativity that accompanies it.

More profoundly, both Turner's and Wilde's artistic outlook foretells a very different future for the ideological extremes of environmentalism. Wilde apparently thought that socialism would ultimately fail because it involved 'too many meetings'. Unfortunately the Marxist meme has now migrated into the environmental movement (read this dissapointing paean to Marxian environmentalism by Paul Gillespie in today's Irish Times to see what I mean). But to paraphrase Wilde, I think those Greens who would lead us back to some kind of bucolic, low carbon past (think Amish) will ultimately fail because life wants to happen ...

The artists will once again show us the future; one in which we each delight in this sweet, short moment of Be-ing and consciousness; alive in a universe abundant with all the means we need to live creative, generative lives. In short, to be fully human.
Posted by Gerard O'Neill at Saturday, August 09, 2008