Get Married, Be Happy 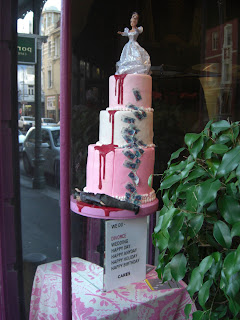 I was struck by some of the thoughts in Cardinal Seán Brady's recent talk to the Humbert Summer School last Sunday. Most of the subsequent coverage focused on his suggestion that the No vote in the recent Lisbon Referendum was partially due to growing disillusionment on the part of Catholics with the secular direction of the European Union project. I doubt that this is as significant a factor as the Cardinal suggests, though it would certainly be worth exploring further.

But there were other things in the Cardinal's speech that did strike a chord with me. One of the things he calls upon the leaders of Europe to do is "to pay attention to protect the family based on marriage, for these are the foundations on which our common European home rests." There I think he is on much firmer ground with his analysis. I've blogged before on the issues of marriage and family trends, and I certainly think it warrants the attention the Cardinal proposes.

Stepping back from political and theological perspectives - and applying a cold, socio-biological analysis - it would appear that monogamous marriage is a social institution invented by men (our feminist sisters fighting the Patriarchy were right in that regard), which provides most men with regular sex in return for being regular fathers. Oh, and there's a small spin-off benefit called 'Western Civilisation'. I know, not very romantic.

Like all 'invented' social institutions (e.g.: money, nationality, even language) it has proved to be a remarkably successful invention because it works. Married people are generally happier than those of other marital statuses (males and females), even in Ireland after a period of rapid social change (pdf). Though happiness levels in marriages change over time, both husbands and wives tend to end up equally happy eventually. And yes, married men do have more regular sex than single men.

All of this puts the recent debates about gay marriage and polygamy in perspective - for me anyway. Personally I don't have a problem with some kind of legal recognition for gay couples, not least in terms of tax treatments vis-a-vis inheritance etc. As for polygamy, it does seem that polygamous men are happier (big surprise there!), but the same studies don't report on the happiness or otherwise of the males denied wives as a result of 'crowding out'. Given the 50/50 ratio (approximately) of males and females in the population then there's always a danger that polygamy will leave us facing some of the same dilemmas as China with its surplus of 40-60 million young men. Actually, we'll probably be facing China's and India's problems directly ...

So the Cardinal is on the right path: monogamous, heterosexual marriage is truly the building block of peaceful, prosperous civilisation. And that's something we've all got to support.
Posted by Gerard O'Neill at Wednesday, August 27, 2008