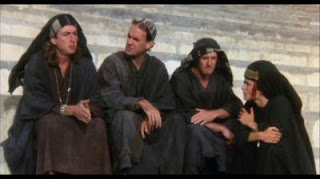 I remember a cartoon during the last UK recession: it showed a man about to be shot by a firing squad. One onlooker turns to another and explains "they've decided to shoot an economist every day until the economy recovers ..."

The cartoon came to mind as I read a report in today's Irish Times quoting Cori's Seán Healy lament that economists have become “the ultimate authorities” in most policy areas and their views are given “the status of absolute truth”. This surprised me given the unfolding train wreck that is our mis-managed economy. It goes to show, as Fr. Seán should know, even ultimate authorities holding the absolute truth can be ignored by the faithful from time-to-time.

Of course, Cori's analysis of all that is wrong with Irish society is a classic case of seeing the world through grey-tinted glasses. Like the characters in Monty Python's Life of Brian, wondering "what have the Romans ever done for us", Cori begrudgingly acknowledges the 'paltry' benefits of the Celtic Tiger before segueing into a familiar dirge about all the awful consequences of growth, wealth and development. I don't have a copy of Seán's speech, but it does seem to be a re-hash of his paper (pdf) with Brigid Reynolds on the concept of a basic income (other interesting papers here).

So we're told that, sure, incomes have risen but so have the numbers with incomes below the poverty line (using the 'elastic ruler' of 60% of median incomes as a 'poverty' measure). We're told that, yes, many more people have paid jobs but that only makes people doing unpaid work feel inferior. We're also told by Cori that, yes, people have more jobs and money but they are 'time poor' on account of having to commute from more remote housing developments etc. I could go on but I think you get the gist. As I've said before, there's a real sense that Cori would be happier if it was the 1980s again.

Cori's world is a zero-sum world (as it is for most political activists): the rich have expropriated the poor; the North has expropriated the South; men have expropriated women; this generation has expropriated future generations and so on and so on. They are wrong - ironically locked into the mechanistic paradigm they disparage in their analysis. I believe on the other hand, as do most economists, that we live in a positive-sum world. What Cori and their ilk fail to understand is that economic growth improves society's social character because it gives people hope.