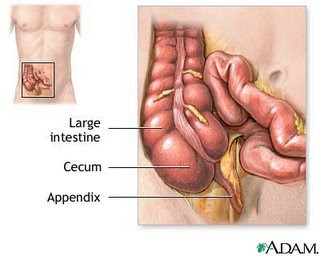 A recent post by Chris Dillow over at Stumbling and Mumbling got me thinking (more than usually) about happiness. Chris was making the point - paraphrasing crudely - that parents whose children die are irrationally sad as they overestimate the happiness the children would have given them anyway. Chris writes with compassion a lot of the time, by the way, so don't let my abstract make you think he's a cold-hearted monster.

Still, it got me thinking. My initial reaction as a parent (Chris doesn't have any children) was an emotional 'you don't know what you're talking about Dillow' kind-of-thing. But the more I reflected on what he had said the more I began to wonder about this 'happiness' thing we are all so preoccupied with (as a society, economy etc). When we start viewing things like the death of children through the lense of 'happiness' have we got something completely out of kilter?

And that's when I began to wonder if happiness as an emotional state is more akin to our appendix: something that probably serves some (not yet clear) purpose early in life but that becomes superfluous to our wellbeing as we get older? Moreover, is happiness - in keeping with the appendix analogy - something that can on occasion become poisonous and even 'kill' us? Emotional appendicitis, so to speak. Killing our humanity and culture rather than our bodies?

Going further, we may have put the cart before the horse with this whole happiness thing: perhaps it is consciousness not happiness that is the lense we should use. This is the conclusion of a delightful essay by Nicholas Humphrey:

All the same, I will not hold back from telling you my own main conclusion from a lifetime's interest in what consciousness does. I may shock you by what may seem the naivety of my conclusion (I've shocked myself): I think the plain and simple fact is that consciousness—on various levels—makes life more worth living. We like being phenomenally conscious. We like the world in which we're phenomenally conscious.

We like ourselves for being phenomenally conscious. And the resulting joie de vivre, the enchantment with the world we live in, and the enhanced sense of our own metaphysical importance have, in the course of evolutionary history, turned our lives around.

Humphrey anticipates the moral philosophy of Don Cupitt who uses the term Brightness to describe how language literally lights up our consciousness of the world we are immersed in, something only humans are capable of. And so, as a conscious, enchanted, human Be-ing I embrace life without the necessity for a happiness appendix. But yes, of course, I prefer to have a healthy appendix, both in its biological and emotional variants.
Posted by Gerard O'Neill at Monday, August 04, 2008