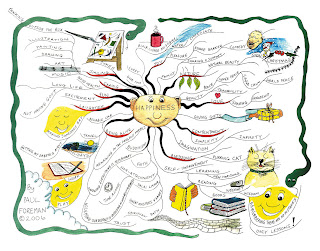 I often feel about economists talking about happiness the way I feel about nuns talking to schoolgirls about sex: I don't doubt they are well-intentioned, but I do doubt that they're the best qualified people on the subject ...

So I was kind of relieved when I read a delightful hatchet job by my old colleague Paul Omerod called The Unhappy Thing about Happiness Economics (pdf). He points out (with co-author Helen Johns) that the variation in historical trends in measured happiness in countries like the UK is mostly explained by statistical 'noise' due to the use of surveys (which are always subject to margins of error). In other words there has been no significant change in happiness measures over time - for good or bad. He therefore puts paid to all those social analysts and commentators who demand more state intervention to correct all the things that are allegedly making us unhappy. As Johns and Ormerod declare:

Our inexorable conclusion is therefore that society-wide happiness time series should be abandoned as they don’t tell the social scientist anything useful; in addition, the flatness of happiness time series most certainly cannot be pinned on the economic system, and neither do they point to some kind of social aberration in need of government correction.

Average happiness has shown demonstrably stubborn flatness despite vastly differing government styles and levels of inequality, and it is seriously misleading to argue that, armed with the ‘insights’ of time-series happiness research, government intervention is going to make society measurably happier.

But while I think the authors do a convincing job of destroying the nonsensical idea that happiness is some kind of social trend that can be measured consistently let alone 'managed', there are some aspects of happiness economics that I do think are worth exploring further. For example, economic research shows that:
So I think the message is clear: leave happiness alone if you are a politician fantasizing about socially engineering us into a better frame of mind; but do bear in mind that politics can make us happier if it leaves people alone to improve their own lives and ultimately those of their fellow countrymen and women.
Posted by Gerard O'Neill at Thursday, August 07, 2008