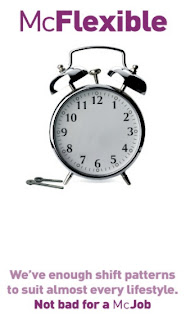 The news that McDonalds are hiring 4,000 new employees in the UK in the teeth of an imminent recession got me thinking about flexibility. I think part of the fear that has gripped the Irish people about our economic situation is the realisation that 'nobody can help us': least of all the Government. Hence the record breaking gloom as measured by the ESRI's consumer sentiment index.

And yet ... most of us who want them still have jobs to go to each working day, and a pay cheque to spend at the end of the week or month. To paraphrase John Kenneth Galbraith: we seem to live in a world of 'private contentment and public anguish'.

Fundamentally the economic has changed fundamentally since the formative years of our politicians and journalists - I'm just not sure they all realise this. What we have now is a far more flexible economy - or 'McConomy' if you wish - where the traditional totem of the '9-5 jobs for life' simply no longer applies. This also means that there is a bigger disconnect between the headlines (GDP growth, consumer confidence etc.) and our lived daily experiences.

Chris Taylor made the point at the weekend that a lot of businesses are doing alright: but the media only want to report the bad news stories (100 layoffs by one company) rather than the good news stories (120 new jobs created by 20 companies). In fairness, there is no 'news' in a small business hiring one or two staff. The small firm won't make a big deal about it either for that matter. But I think it's more than that. As David Ranson pointed out in a recent op ed in the Wall Street Journal:

There's an old saying that if your neighbors are losing their jobs it's a recession; if you are losing yours it's a depression. It's therefore unfortunate that such a large fraction of prominent forecasters hails from the financial community. Their views are colored by the turmoil suffered in their industry. In an earlier generation, many of the best-known forecasters ran economics departments in nonfinancial companies. Today these are a dying breed, thanks to the past decades of corporate cost-cutting.

We are not a nation of whiners, but we do have a lot of alarmists. It is becoming politically incorrect to suggest that the economy is basically sound. We shouldn't expect forecasters to shrug off the depressing effects of what's happening in their own back yards. This is human nature. We just need to keep things in perspective when we listen to them.

He is referring to the United States, but his analysis is just as apt for Ireland. I for one will always bet on the flexibility and savvy of individual entrepreneurs and work-teams any day, than on PR conscious politicians and overwrought journalists.