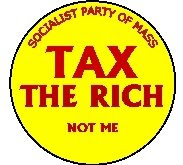 So the Government wants to bring back third-level fees. For wealthy people of course; not for the likes of you or me heaven forbid. Nor is this to be seen as a panic measure, perish the thought: rather we're to assume it's part of a visionary, joined-up, holistic, strategic programme designed to ensure we have the best education system in the world ... Yeah right.

Still, sometimes panic is good if it shakes people out of their complacency. But why stop at means-testing third level education (for that is what it amounts to)? After all, according to the Department of Finance's own Revised Estimates for Public Service Expenditure 2008 the total cost of grants to 3rd level institutions will be €1.4 billion this year. But spending on Child Benefit will be €2.5 billion this year - and not a cent of it will be means-tested. Just think what could be done to alleviate child poverty (or to provide proper care for those children whose parents can't cope) if that money was spent on those who need it. And not on middle-class people like, er, me who frankly don't need it (but will take it anyway since it's 'free money' from the Government and sure doesn't it grow on trees ... ;-)

We're going to hear a lot more talk about tax over the coming months and years. And it won't be idle chit chat either. We are living with the consequences of Binge Government, identified by the OECD last April, whereby those in power mistakenly (or naively) interpreted short term surpluses in tax revenues from the property sector as a permanent feature of the economic landscape. A bit like prison officers getting shirty because their overtime pay is threatened by new work practices: their lifestyles assumed that the overtime pay was their's indefinitely ...

Nor is it just national government (and taxes) that we need to worry about. I've speculated before that some of our local authorities could be in danger of going bankrupt due to the collapse of the construction sector. Like the Government, they got used to transitory spikes in taxes (in the form of development levies) and now these have more or less dried up. The result: their expenditure plans are somewhat out of kilter with their revenues. The Sunday Business Post reported yesterday, for example, that Kildare County Council have taken in only €7.5 million in levies so far this year against a 'budgeted' intake of €30 million for the year as a whole.

All of this means that we're going to have a lot of national and local politicians looking around and wondering where they can get their hands on some cash pronto. The answer, of course, will be from you and me. And not just personally but also commercially if you happen to work in a business that pays rates to any of our increasingly cash-strapped local authorities.

We will of course be invited to hand over our money for the greater good of the nation. Though as that eminent political economist Chris Rock once observed: "you don't pay taxes, they take them!". But here's a thought: new research shows that electorates trust politicians with 'extreme views' rather than middle-of-the-road muddle because it implies they've got strong values and can be relied on in times of uncertainty. Maybe there's a 'Signature Idea' out there around better value for taxpayers waiting for some adventurous politician to seize it?
Posted by Gerard O'Neill at Monday, August 11, 2008