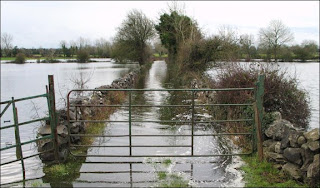 I'm beginning to worry about the wellbeing of the good folk in Met Eireann. Night after night they warn us of imminent 'Atlantic depressions', 'no end to bad weather in sight', 'no hope of a reprise in the weather' etc etc. If the Met Eireann website took Google Ads they would all be for Prozac.

Of course the bad weather has proved to be something of a conundrum for Irish Climate Alarmists. Met Eireann have a report on their website called Ireland in a Warmer World which looks at different scenarios (not forecasts) for the possible evolution of Irish weather given different assumptions about the trend in global climate change etc. Here's what their analysis of the impact of climate change on Irish rainfall has to say (page 11, section on Precipitation):

I'm being unfair of course. One swallow does not make a summer, and one bad summer does not make a trend. Okay, two bad summers in a row make a trend but we'll let that go for now. It hasn't stopped some from nevertheless arguing that our current spell of wet weather is, naturally, due to climate change. Hence John Gibbons in yesterday's Irish Times suggesting that 'freak weather' is itself a sign of climate change, even if - as he admits himself - the climate change models all project drier summers, not wetter ones. Still, I agree with John on one thing: there's no doubt that much of our flooding problems of late are anthropogenic in nature: it's called bad planning.

I don't know how anyone can deduce any trend in our summer weather right now. Met Eireann's own data shows that the summers of 2005 and 2006 were drier than usual, and those of 2007 and 2008 have been wetter than usual (like you didn't know ...). In fact it points to a major problem for those still convinced that the IPCC got it wrong and who argue that things are going get a lot worse than in the IPCC's illustrative marker scenarios (hence the Climate Alarmist tag). Which reminds: how can the scientific debate on climate change be 'over' (the usual response to Climate Denialists) and yet the same people who say it's over then go on to say that the IPCC consensus is too conservative and therefore wrong?

I'm on the side of the Climate Agnostics: I believe our climate is changing (it always has) and that we need to prepare for the consequences (including recognising the role of human behaviour in causing and mitigating climate change). Though he's the bete noire of the Climate Alarmists, Bjorn Lomborg is right when he argues that the priority response to climate change should be to help those most at risk (the world's poor) get richer so they can handle change more effectively. And make a global commitment to R&D to develop mitigating technologies (such as non-carbon energy sources).

It is about keeping our options open in terms of being able to respond flexibly to whatever challenges climate change poses. As noted in this excellent essay from the Cato Institute:

In the face of massive uncertainty on multiple fronts the best strategy is almost always to hedge your bets and keep your options open. Wealth and technology are raw materials for options. The loss of economic and technological development that would be required to eliminate literally all theorized climate change risk would cripple our ability to deal with virtually every other foreseeable and unforeseeable risk, not to mention our ability to lead productive and interesting lives in the meantime. The precautionary principle is a bottomless well of anxieties, but our resources are finite — it’s possible to buy so much flood insurance that you can’t afford fire insurance.

The best response we can make in Ireland is to focus on energy related R&D to ensure that we play our part in developing the tools to respond to the climate change challenge. And use Irish Aid to help those least able to help themselves as a result of climate change - whatever it's causes.

It won't make much difference to the forecast from Met Eireann for the weekend unfortunately. But then you just have to remind yourself that other countries have climate, Ireland has weather ...
Posted by Gerard O'Neill at Friday, August 15, 2008