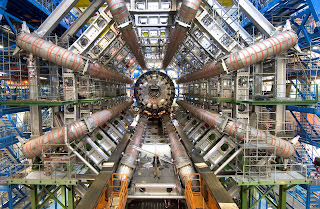 The odd thing is how limited the consequences of the financial black hole created by the demise of Lehman Brothers (and Merrill Lynch and Fannie and Freddie and Bear Stearns ...) for the real world. I think Anatole Kaletsky calls it right when he points out that most of the financial leveraging over the past 10 years was between financial institutions rather than between banks and, say, borrowers. Here's his explanation for the current mess:

To understand the underlying reason why the enormous deleveraging triggered by the still-expanding financial crisis is doing much less damage than generally expected to the real economy, consider the following example: before the arrival of “hyper-finance”, if a family wanted a £100,000 mortgage they would go to the Halifax and simply borrow £100,000. Now consider what would have happened in the new financial world. The family would have borrowed £100,000 from Northern Rock, which would sell £100,000 of bonds to hedge funds, which would buy these bonds with £100,000 borrowed from Bear Stearns, their prime broker, which would raise this money by selling £100,000 of commercial paper to Citibank, which would then borrow £100,000 through the inter-bank market from Halifax. The original borrower is still the same household and the ultimate lender is still Haliax, but now a £100,000 mortgage has created £500,000 of new debt.

So we're sort of back to where we started: banks make profits by charging interest on loans to borrowers who either earn the money or create the income stream (if they're a business) to repay the loan. Boring but probably better for the economy in the long run: even though we've still a lot of toxic waste to clean up.
Posted by Gerard O'Neill at Tuesday, September 16, 2008