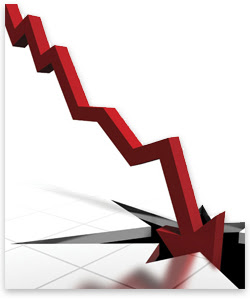 Mark the day folks: yesterday's bloodbath on the ISEQ and the world's stock markets was but an adult-rated movie trailer for the gruesome main feature about to play today.

The rejection of the $700 billion rescue package by the US House of Representatives last night means that Tuesday, 30th September 2008 will go down as one of those days when the course of history changed.

Willem Buiter, as usual, gets it exactly right:

What is likely to happen next? With a bit of luck, the House will be frightened by its own audacity and will reverse itself. If a substantively similar bill (or a better bill that addresses not just the problem of valuing toxic assets and getting them off the banks’ books, but also the problem of recapitalising the US banking sector) is passed in the next day or so, the damage can remain limited. If the markets fear that the nays have thrown their toys out of the pram for the long term, the following scenario is quite likely:

None of this is unavoidable, provided the US Congress grows up and adopts forthwith something close to the Emergency Economic Stabilization Act as a first, modest but necessary step towards re-establishing functioning securitisation markets and restoring financial health to the banking sector. Cutting off your nose to spite your face is not a sensible alternative.

PS My remaining financial wealth is now kept in a (small) old sock in an undisclosed location.

PPS The conduct of both US Presidential candidates in this matter makes them unfit for purpose.

Today will not be pretty. Anyone with a pension, savings or investments has got a ringside seat, and is going to get splattered. Bring a towel.

The markets are up - all of them. I hang my head in shame, sackcloth and ashes have been donned. I fell victim to my own Narrative Fallacy: as if billions of decisions by millions of people to buy or not buy stocks could be reduced to a story about a vote by a handful of politicians in the USA. When will I ever learn? Mind you, the Irish Government's decision to guarantee all deposits did lead to a rally in the ISEQ, and maybe all the other stock markets - oops, there I go again: slap-wrist! Man, it's hard to lose that god-damn Narrative Fallacy habit: think I'll stick to weather forecasting and the 3.15 at Chepstow - way better odds of getting it right ...
Posted by Gerard O'Neill at Tuesday, September 30, 2008