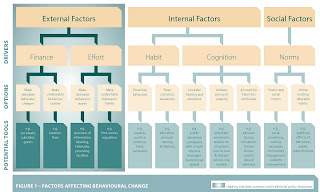 The English, as ever, are having a real debate about real policy issues. Unlike our ongoing Social Partnership group hug, they are debating behaviour economics, its insights and its place in shaping the design and purpose of policy interventions across the spectrum of political choices. It's fascinating stuff. See this magnificent report from the Social Market Foundation called Creatures of Habit? The Art of Behavioural Change (from whence the excellent explanatory graphic I've used in this post).

There's an equally illuminating debate over at Prospect between Tim Harford and Pete Lunn about whether behavioural economics is really just hype - or something with far reaching implications. As I've noted in previous posts, UK policy makers and politicians are grappling with the failure of the traditional Left solution to social problems (spend more money) which has left nothing but a spectacular level of family breakdown and now burgeoning fiscal deficits.

There is also a recognition by the Tories that the insights of behavioural economics (with their emphasis on individual choices as well as external influences) are powerfully aligned with traditional conservative principles from Edmund Burke onwards. Listen to this wide ranging and articulate presentation to Demos by Shadow Chancellor George Osborne to see where that debate is going.

Perhaps when our national group hug is over we might get down to thinking through some of these issues for ourselves, instead of retreating to CORI-nation Street and spending more good money on more bad policies.
Posted by Gerard O'Neill at Tuesday, September 02, 2008