Praying for a Carbon Tax 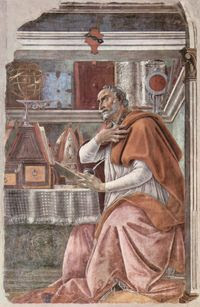 St Augustine of Hippo famously asked God to 'make me chaste Lord, but not just yet'. The same might be said about a carbon tax. In all the recent coverage about the forthcoming, fast-tracked budget it is the tax that dares not speak its name. With good reason: it would be hugely economically and politically risky in the present climate (pardon the pun).

This will be tough on the Greens in government: without a carbon tax they will have little to show for their time at the cabinet table come the next election. But the reality in an Irish context is that a carbon tax demands a major re-structuring of income taxes, business taxes and social welfare payments: as set out in considerable detail in a recent paper by the ESRI. With the Government worried about how much they are going to raise from already existing taxes, now is probably not the time to take a massive gamble with the entirety of the tax system by introducing a tax that does not exist anywhere else in the world.

And looking beyond our parochial concerns, there is even less political will for a global carbon tax. Not least because the task of conjointly forecasting climate and economic variables is something we are only beginning to grapple with. As noted in this excellent essay from The New Atlantis:

Long-term climate prediction is in its infancy. Estimating the cost impact of various potential warming scenarios requires us to concatenate predictions made by non-validated climate models with those made by economic models that purport to understand the economy of the twenty-first, twenty-second, and twenty-third centuries. It is hubris to imagine that these can guarantee accuracy, and impossible to validate such claims. Epistemological humility requires us to admit that we can predict reliably neither what impact human activities will have on the climate nor the resulting impact of these climate changes on the economy over multiple decades and centuries.

Which is not an argument for doing nothing - quite the contrary. A focus on energy efficiency and non-emitting energy generation technologies will be crucial to our response to the risk of long-term climate change, and to the (in my opinion) far more imminent and deadly threat of peak oil. Indeed, rising oil and gas prices have done more already to curb our CO2 emitting habits then any hypothetical carbon tax. Be careful what you pray for.
Posted by Gerard O'Neill at Saturday, September 06, 2008