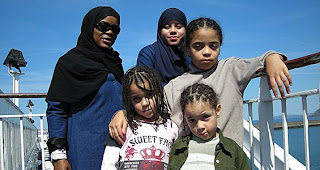 The Irish are a tolerant people by and large. We tend to beat ourselves up a lot about our health service, our litter and our weather - often ignoring the good things about our country (except the weather, that's really getting to me now). Among the positives is our extraordinary degree of tolerance. Take the findings about Ireland in the recent report on Discrimination in the European Union 2008 (pdf). On measure after measure we are more tolerant than the EU27 as a whole on indicators such as:
I think by far the most powerful measure of our tolerance is the way in which we have responded to the extraordinary speed and scale of immigration to our country over the past 10 years or so. As noted in new research by my own company, the majority of Irish people consider immigration to have been a good thing on balance for Ireland. Almost no other country has experienced such a surge in the share of foreign nationals in its total population (to 10% in just 10 years) with so little real social, economic or political strife as Ireland. There is no greater testimony to our tolerance as a people in my opinion.

None of this is to say that things will continue on as they have until now. Hardly; given the sea change in our economic fortunes and prospects. Whether it's about the wearing of hijabs or tighter immigration controls, we are now facing the hard decisions about the future course of immigration - and the integration of immigrants - in our country. Ultimately, debates about immigration and integration are about values - not economics, or politics or rights. Our tolerance is founded on the values that have made Ireland what it is today - a Western mixture of Christianity, Ancient Greek Philosophy (much of it via Muslim and Jewish thinkers) and our own Celtic heritage of course.

So the key task in anticipating the future course of immigration and integration in Ireland is one of gauging the course of our values in the coming years and, indeed, generations. Adding to the challenge is the cultural interaction between immigrants and the host population and the inevitable negotiation of values that that interaction gives rise to. But not only is Ireland being changed by immigration, it was (and is) changing itself as a country by becoming a post-Christian, secular society - regardless of trends in immigration.

That makes for a much more comlex debate - one comprising intrinsic and extrinsic sources of change in fundamental values. The task then is to equip ourselves with the tools to accommodate this change even as the change is already under way. I find inspiration for this task in the writings of philosophers like Austin Dacey whose book - The Secular Conscience: Why Belief Belongs in Public Life - should be required reading for all our politicians and others engaged in the ongoing debate.

I believe that the intrinsic tolerance, compassion and wisdom of the Irish people will enable us to successfully negotiate the turbulent times ahead. Regardless of the weather ...
Posted by Gerard O'Neill at Wednesday, September 10, 2008