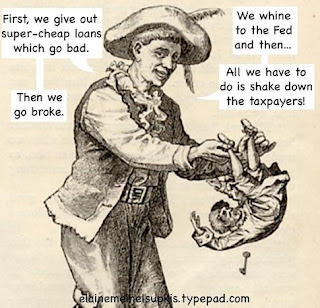 The current financial crisis is one of too little innovation, not too much. At the heart of the sub-prime catastrophe that started it all is the plain old domestic mortgage. We forget how recent an innovation such loans are. In a recent Econtalk interview Robert Shiller explained that up until the Great Depression, most loans for the purchase of houses were 5-year rolling balloon payment mortgages. The Depression forced the innovation of the 15-30 year long-term mortgage that we know today.

The problem with the typical mortgage we are all now familiar with is that the repayments are effectively fixed to the rate of interest on the loan - not to the trend in house prices nor the payee's income. If the innovation behind sub-prime loans had been focused on delivering this sort of flexibility (rather than the obscene fee-generating Ponzi scheme we're all now paying for) then we might have had a better outcome. Shiller elaborates on his ideas in a recent article in the New York Times.

But it could go a lot further: Shiller speculates about a New Financial Order in which people will be able to take out livelihood insurance to protect against economic uncertainty and redundancy in an age of technological change. Furthermore, he advocates radical changes to taxation to reduce not just the lifetime consequences of inequality but also inter-generational inequalities in which a younger generation pay for the burden of the older generation once retired.

These are financial innovations that have the potential to transform the lives of billions around the world for the better. The sooner we sort out the mess of Ponzi Capitalism and return to a free market in which financial innovation delivers real benefits to the 'have nots' and not just to the 'have mores' then the sooner the world's poor can get on the ladder of economic progress. And it can only come about if the regulators abide by the maxim 'first do no harm'.
Posted by Gerard O'Neill at Tuesday, September 23, 2008