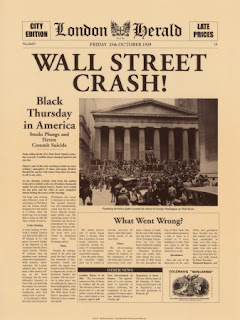 Yesterday was another Black Thursday on Wall Street - the Dow Jones had its biggest fall since 1987, taking the index below 9,000 for the first time since 2003. It happened late in the day - so today's Irish papers haven't covered it. Current trends bear an uncanny resemblance to a scenario described in a UK Government forecasting exercise from two years ago called Black Daze.

One thing seems clear though: the Irish Government's guarantee to Irish depositors looks unlikely to be the end of it. Both the UK and USA (and several other EU countries) have had to bite the bullet and take equity in major banks. So far the Irish Government has been lucky and hasn't had to pay out a cent in response to the current crisis. So far.

But the current extreme turbulence makes it inevitable that one or more Irish financial institutions will need re-capitalised with state/taxpayer funding. Mere anarchy is loosed upon the world ...
Posted by Gerard O'Neill at Friday, October 10, 2008