The Coming Winter of Discontent 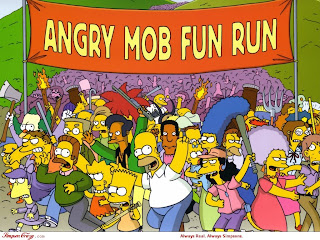 Protest marches are fun. I have fond memories from my student days of CND marches to Hyde Park, with the Clash playing London's Burning on stage before Tony Benn came on to demand the cruise missiles be taken out of Greenham Common. Bliss it was in that dawn to be alive, but to be young was very heaven ...

But protest marches rarely change anything - though they have a therapeutic effect in reminding us we live in a democracy where every voice (and vote) counts. In the end the cruise missiles left because the Soviet Union imploded and not because Maggie and Ronald were persuaded by our rhetoric (Maggie Maggie Maggie, Out Out Out). 'Tis often the way.

Nevertheless we're going to have a lot more protests here in Ireland: we've had the pensioners and the students - next up are the teachers and the farmers. I guess we private sector workers ought to schedule a march - though it's kind of difficult when you're too busy, er, working. In fairness the pensioners do seem to have secured change by their protests, though as is the way of these things the burden they were being asked to bear has now been passed on to others - i.e.: the taxpayers who now face an income levy of 3%. I love that word 'levy', by the way: sounds far more reasonable than 'tax'.

But we're only at the start of the protest season. The big ones will come when public sector workers start marching. I see that happening early in 2009 when our increasingly disfunctional government is forced to introduce another Budget, this time containing serious cuts in the pay and numbers of public sector employees (and more levies - or taxes - for the rest of us).

Though everyone is now acknowledging the unsustainable nature of public sector pay and pensions (and not just in Ireland) nobody has set out what exactly has to be done. So here's my starter for ten - all builds and alternative suggestions welcome:
And then get ready for the howls of protest and a lot more marches.
Posted by Gerard O'Neill at Sunday, October 26, 2008