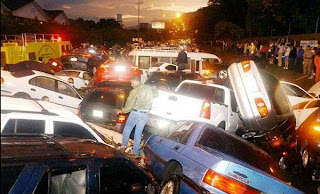 Just when you thought it was safe to come out of the bunker the air raid sirens sound again. Only instead of a Credit Crunch it looks like we're heading into a Currency Crunch. And if you thought Crunch 1.0 was bad wait until you see what's coming next.

Ambrose Evans-Pritchard analyses 'the biggest currency crisis the world has ever known' - coming to a foreign exchange market near you. It is not for the faint hearted. Western European banks are at the centre of a currency storm now under way in emerging markets in Eastern Europe, Latin America, Asia and Russia. Several American banks blew up (so far) in the credit crunch: with combined losses of $1 trillion. European banks exposure to the crisis in emerging markets stands at $3.5 trillion ...

Ambrose has this to say:

Austria’s bank exposure to emerging markets is equal to 85pc of GDP – with a heavy concentration in Hungary, Ukraine, and Serbia – all now queuing up (with Belarus) for rescue packages from the International Monetary Fund.

Exposure is 50pc of GDP for Switzerland, 25pc for Sweden, 24pc for the UK, and 23pc for Spain. The US figure is just 4pc. America is the staid old lady in this drama.

Amazingly, Spanish banks alone have lent $316bn to Latin America, almost twice the lending by all US banks combined ($172bn) to what was once the US backyard. Hence the growing doubts about the health of Spain’s financial system – already under stress from its own property crash – as Argentina spirals towards another default, and Brazil’s currency, bonds and stocks all go into freefall.

Broadly speaking, the US and Japan sat out the emerging market credit boom. The lending spree has been a European play – often using dollar balance sheets, adding another ugly twist as global “deleveraging” causes the dollar to rocket. Nowhere has this been more extreme than in the ex-Soviet bloc.

The region has borrowed $1.6 trillion in dollars, euros, and Swiss francs. A few dare-devil homeowners in Hungary and Latvia took out mortgages in Japanese yen. They have just suffered a 40pc rise in their debt since July.

The result is a convulsion on the eurozone's borders: but one that is nevertheless affecting EU member countries. Hungary last week raised interest rates from 3.0% to 11.5% to stem capital outflows. Romania raised its overnight rate to 900%! With falling oil prices we may well see Russia repeat its infamous default (in 1998) as it struggles with growing dollar liabilities. Indeed we may be in for another round of co-ordinated actions by governments to head off the crisis - this time lead by China.

Though most of these developments have received remarkably little attention in the Irish media (still obsessed with the political fallout from protesting pensioners), we are not immune from the consequences. Friday's collapse in financial stocks on the ISEQ indicates that a lot of fund managers are sensitive to both domestic and foreign threats to the security of Irish banks. Meanwhile key indices of credit sclerosis in the financial markets - the TED spread and Libor - remain at multiples of 'normal' levels.

Next week looks like being another horrible instalment in the unfolding drama we've lived through these past few months. Just as well there's a bank holiday tomorrow - they need one.
Posted by Gerard O'Neill at Sunday, October 26, 2008