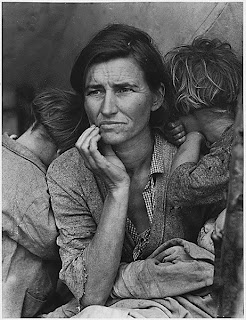 Is it time to start thinking about the D-word: Depression? Economists seem to be in a race to revise their forecasts downwards for the Irish economy - from the Central Bank last week to the ESRI yesterday. You sense the race has only started ...

The extraordinary turbulence on the global stock markets, especially in relation to financial stocks, is unprecedented in my experience (which goes right back to the late 1970s in terms of grown-up awareness of what was happening to the world around me). Jeff Randall writes in today's Telegraph about 'The Ninety Percent Club' - those institutions and corporations that have seen their share prices fall by 90% or more since their peak. RBS joined their ranks yesterday. The speed and depth of such declines has many uncomfortable parallels with 1929 and its aftermath.

Randall also points out that the Dow Jones fell by 89% from its peak in 1929 to its trough in 1932 - and took twenty years to recover. As of yesterday, the ISEQ was down 70% from its peak just over 19 months ago. Irish financial stocks have already fallen by over 80%. I wonder can you have a Depression in one country ...?

Still, we might be lucky and have a 'good depression' as The Economist portrayed the UK's experience of the 1930s recently. Though Irish history paints a much less benign story of the same period. If you can short Irish economic forecasts then now might be a time to place your bets ...
Posted by Gerard O'Neill at Wednesday, October 08, 2008