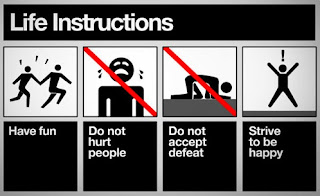 One thing we can all welcome with some relief as the recession bites is an end to the scourge of 'Happyism'. That is the idea that an organisation, business or national government can set about engineering the overall level of happiness of its workers or citizens. Never has an idea been responsible for so effectively bringing about the exact opposite of what it intended.

The benefits of happyism in the workplace are dubious, as noted by Steve Salerno:

There is other evidence that a good attitude sometimes is bad for business. A University of Alberta psychology team studied multiple groups of workers assembling printed circuits and deemed the crankier employees superior to their upbeat counterparts. The grimacing workers threw themselves into their work -- and did it better: Unhappy workers made half as many mistakes as their cheerful counterparts. Studies also suggest that optimists are less vigilant about taking care of their health, less fastidious about safety protocols and less inclined to save money.

Likewise the benefits of happyism as a focus of national policy have been well and truly challenged by economists such as Paul Ormerod. That said, the area of economics and happiness is a burgeoning one, as indicated in this guide to the field from the Geary Behaviour Centre.

In these recessionary times we can expect to hear a lot less about 'affluenza' and how stuff just makes us miserable. Instead we'll likely get to experience real misery, not the psychobabble version pedalled by the advocates of happyism. And maybe that won't be such a bad thing: as Eric Wilson puts it in this delightful essay In Praise of Melancholy:

To be against happiness is to embrace ecstasy. Incompleteness is a call to life. Fragmentation is freedom. The exhilaration of never knowing anything fully is that you can perpetually imagine sublimities beyond reason. On the margins of the known is the agile edge of existence. This is the rapture, burning slow, of finishing a book that can never be completed, a flawed and conflicted text, vexed as twilight.

Or as he puts it elsewhere in his essay, the driving force behind happyism is fear: fear of life's contingency and uncertainty, its terrible beauty. A healthier outlook is to embrace the uncertainty, and the occasional melancholy that goes with it, for that way lies wisdom ... and the delight of unbidden happiness when it does come.

More important still is the realisation that it is the unhappy who bring about change - the happy are always content with the status quo. This is the central point of Julian Baggini's book on Complaint reviewed recently in the Financial Times.

So perhaps our current economic misery is precisely what we need: a spur to change what needs to be changed; aware, of course, that nothing in life is guaranteed - which makes it all the more wonderful for that.
Posted by Gerard O'Neill at Monday, October 13, 2008