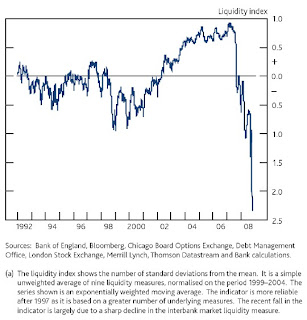 It isn't just the banks that have suffered during the credit crunch. A whole new generation is growing up with a view of banks very different to that of their parents. The UK organisation Reform have produced an excellent study on what they call the IPOD Generation - today's 18-34 year olds - and their attitudes to money. And the message is clear: they don't trust the banks, and their increasing indebtedness (think student loans) are making them resentful and angry. How banks will connect with this generation after such a massive loss of credibility will be one of the bigger recovery tasks they face.

Inded, the scale of the recovery task is enormous. The Bank of England yesterday published the latest of its Financial Stability Reports. I got this graph from the current issue: it shows a composite measure of liquidity in the financial system: last month the index was over 2 standard deviations below the long run trend - there's the credit crunch. The Bank's report is very up to date and written in clear, concise language - well worth a read if you have the stomach for it! In light of yesterday's decision by Halifax Bank of Scotland (Ireland) to stay out of the Irish Government's Guarantee Scheme then Table 1 on page 32 of the BoE report provides some context. It shows that HBOS's Tier 1 Capital Ratio (one measure of financial security) will rise from a current level of 8.6% to 12% once the UK Government measures are in place. RBS will be even higher.

But while the banks are putting their house in order, there's a whole new generation of young people who will never see them in the same light again. Which probably goes for their parents as well.
Posted by Gerard O'Neill at Wednesday, October 29, 2008