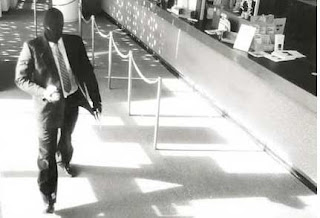 It looks like governments around the world have taken to heart the advice of Willie Sutton about banks, namely: "that's where the money is". The news this morning that the US Government are buying stakes in US banks to the value of $250 billion (which the banks cannot refuse - literally) follows on from yesterday's dramatic developments in the UK, France and Germany. There are only a few conditions attached: about what you pay your managers, what you pay your shareholders and who you loan to.

Of course, these are desperate measures for desperate times, and most banks have accepted these offers they cannot refuse with varying degrees of gratitude. Except Barclays in the UK. But it is only the start, and if previous history of state-owned businesses is anything to go by then it won't be pretty. Here's Philip Johnston on the scenario facing the UK's Alistair Darling:

No doubt he wants the banks to operate as commercially as possible, but this is not how state industries work, and especially not when they are run by such a micro-managerial government of the sort we have today. The fact is that billions of pounds of taxpayers' money are now tied up in these ventures, as was the case in British Leyland and Rolls Royce many years ago; suddenly, decisions that were once for a board of directors to make become political. Seemingly trivial business matters are raised in the House of Commons. MPs are approached by constituents worried about their deposits or businesses wanting refinancing. Soon, ministers are accused of favouring firms in Labour constituencies over those in Tory-held seats. There is little point in Mr Darling saying ''it's nothing to do with me, guv". As far as the taxpayer is concerned, it is.

The pressure is now on the Irish Government to follow suit: at least as far as the markets are concerned which lopped more value of AIB and Bank of Ireland yesterday. Indeed, the value of all Irish banking and financial institutions combined stood at less than €8.5 billion yesterday - my how the mighty have fallen!

But perhaps the Irish Government is wise to hold off on any decision to follow the examples of the US and UK for now. It may well be that these efforts elsewhere will have the desired effect, and the flow of interbank lending will pick up. Mind you this still has some way to go: the TED Spread indicator of interbank lending rates remains stuck at a record high level.

Still, the brave among us might take our cue from Willie Sutton and the world's governments and decide to get back into bank shares: it was round about now during the Great Depression that stocks started to pick up. Though I think I'll take my lead from the Irish Government and wait and see what happens next. I'm just not that brave.
Posted by Gerard O'Neill at Tuesday, October 14, 2008