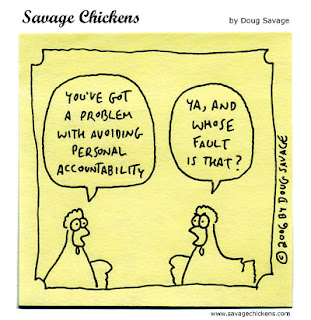 Of course we know who to blame for the current crisis: bankers, developers, politicians. Or do we? What if we've got it the wrong way round? After all: who took out the sub-prime loans in the United States, or the buy-to-let mortgages here in Ireland?

I know, it's a bit rich blaming those now 'upside down' with their mortgages when the bankers who loaned the money are getting bailed out by taxpayers on both sides of the Atlantic. But it's worth further consideration: what were people thinking when they took out sub-prime mortgages in the United States when they didn't even have a job or income to meet the repayments? We know what the people who loaned them the money were thinking: bonuses. But really: how did people think the biggest housing bubble in history was going to end - with a slow imperceptible hiss?

Even in Ireland you have to wonder about the expectations of those who took out the loans from the banks that were also funding the developers building the houses. Especially buy-to-let mortgages. As a recent and informative analysis of Ireland's housing bubble by the European Commission (pdf) points out:

The proportion of buy-to-let mortgages in total residential mortgages has been increasing over time, reaching 26% in 2007 and accounting for almost half of all new homes bought in the last two years. The rental market has expanded from 16% of total housing units in 2000 to 21% in 2006. The growth in the number of second or vacant dwellings has added to the boom in the housing sector. The share of vacant dwellings in total housing increased from 10.5% in 1996 to 16.7% in 2006. The biggest class of vacant habitable dwellings in the "other" category are dwellings held for investment purposes.

So should the homeowners and private investors who bought at the peak be bailed out? Whether sub-prime in the US or buy-to-let in Ireland? If they're bailing out the banks then why not bail the borrowers? Of course this raises serious moral issues. After all, where does personal responsibility begin and end in relation to people's financial decisions? It isn't an easy one, as this debate over at the brilliant In Character journal illustrates. And will our methadone housing policies only make matters worse?

David Quinn sets out some interesting thoughts in yesterday's Irish Independent on the role of character in today's financial turmoil. Though he doesn't go far enough: yes, banks and politicians need to improve their character - but so also do borrowers (and not just in terms of their sexual behaviour as David has it). We all need to be morally responsible - not just the bankers, developers and politicians. As it was put recently in an op ed from the Acton Institute, morality and markets must go together, or else we'll have neither:

In short, we're learning the hard way that virtues like prudence, temperance, thrift, promise-keeping, honesty, and humility - not to mention a willingness not to do to others what we wouldn't want them to do to us - can't be optional-extras in communities that value economic freedom. If markets are going to work and appropriate limits on government power maintained, then society requires substantial reserves of moral capital.