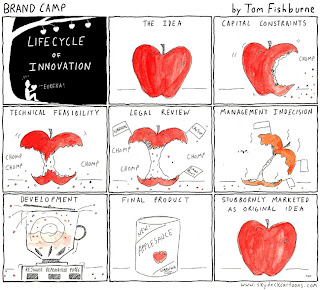 I've decided to leave the budget, taxes and the public sector alone for a while (or at least until tomorrow) and focus on the bigger picture. Yes, there is a bigger picture. I was at the launch this evening of the PwC Global Entertainment & Media Outlook 2008-2012. There were two very informative presentations from Marcel Fenez, PwC Hong Kong, and Bartley O'Connor, PwC Ireland.

The highlight for me was the talk by John Herlihy, Google's EMEA director of online sales and marketing. One statement in his opening comments caught my attention: 'broadband is like oxygen'. He then pointed out that countries that are not up to global standards when it comes to broadband (including wifi and mobile broadband) are not standing still, they are falling rapidly behind. I couldn't help feeling he had in mind countries like the one I could see out the window behind him, from the vantagepoint of the 7th floor of PwC's impressive new offices on the Liffey.

As I've said before, if talk could build infrastructure then we'd make Scandanavia look like, er, Ireland. Obviously John was talking from the vantagepoint of Google's world view - and what a view. We are lucky indeed to have Google's European foothold located here in Ireland. But achieving the full potential of that investment will take a great deal more than platitudes. As John observed, the reality is that our education system is not producing graduates with the types of skills they need (e.g.: data analysis - Russians are the best apparently as they produce lots of maths graduates; and translational skills - there are more fluent English speakers in India than in Western Europe, including the British Isles!).

PwC had arranged for some local digital entrepreneurs to demo their wares to the audience after the talk, including the marvelous Sophia's Diary. It was a nice reminder that we have lots of talented people in this country, more than capable of delivering the wealth and employment creating businesses that we will need to maintain and improve our standard of living in the years ahead. Capital-strapped banks and cash-strapped governments permitting.

But sometimes great things come from inauspicious beginnings, as this story reminds us. The message: keep the digital faith.
Posted by Gerard O'Neill at Thursday, October 16, 2008