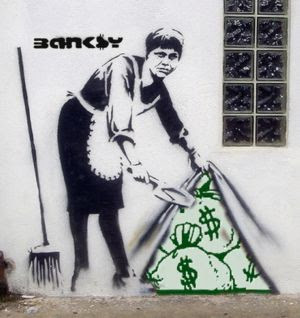 I guess free marketers like myself are going to have to get used to a chorus of 'I-told-you-so' stories in the coming days, weeks and months. Greedy capitalists has been found out and found wanting: they were just in it for the money after all. Or so it goes according to our resident economic sirens including, alas, Archbishop of Dublin Diarmuid Martin.

Archbishop Martin was interviewed on RTE last week and his comments were reported in The Irish Times. Commenting on the present financial crisis, the Archbishop called for a fairer, more equitable capitalism - through government intervention if necessary.

I think the Archbishops views are both inevitable and unhelpful. They are inevitable because there is a long tradition in Irish Catholic thought in particular that is anti-business: usually anti 'big business' - but it doesn't tend to be all that discriminating. Tom Garvin, in his magnificent book Preventing the Future, talks about the ideology of Distributivism and Vocationalism that pervaded a great deal of Irish Catholic thinking from the early 20th century right through to today. It gave rise to an ethos that essentially saw profits as a necessary evil, with usually more emphasis on the latter word. CORI are the but the latest manifestation of this ethos in Irish society: and Social Partnership is an obvious example of the ethos in practice.

The Archbishops views are unhelpful because they simply fly in the face of everyday reality for 99% of business owners and directors in Ireland. Ireland is fast becoming a less-than-ideal place in which to run a business. Aside from the extraordinary costs of doing business here (from labour and energy costs to legal fees and compliance charges), there is the added disadvantage of trading and competing in the euro currency in markets such as the UK and USA (on which we are more dependent than any other eurozone country). On all these matters the Archbishop (and CORI) have absolutely nothing to say: except when the global financial casino implodes and out come their stock 'evil, greedy capitalists' explanations.

As someone who had worked much longer than me in the world of business once put it: 'after many years in the rat race I haven't met many rats'. And that is the reality: most people running businesses are decent, ethical human beings motivated by a desire to build a successful business that rewards its employees and its shareholders, keeps its customers happy, and fulfils their own personal ambitions for success and significance. The only way to sustain that ambition is to run the business profitably. But it never means maximising profits regardless of everything else: that would merely sabotage the collective, long-term ambitions of directors and staff alike.

Those who don't work in business generally don't get it: they enjoy the luxury of a salary or pension at the end of the month without the slightest fear that it will not be in their bank account when they go to check. They can even afford to entertain delightful delusions such as that of Fintan O'Toole in his recent Irish Times piece claiming that 'there is not such thing as private enterprise'. Here he is in full flow:

What the present crisis is revealing is something that those on the left have always known. It is, quite simply, that there is no such thing as private enterprise. The market system, even in its most enthusiastically buccaneering forms, is underpinned by governments. It is not just that governments create the framework of law and the physical and social infrastructure that allows businesses to function. It is that governments, whether they like it or not, are the ultimate guarantors of the financial system that in turn drives the entire economy.


On the first one let me explain, briefly. All currencies everywhere in the world are controlled and created by national governments or pooled authorities such as the European Central Bank. No private company or bank anywhere in the world creates its own money supply. All currencies everywhere are 'fiat currencies' - literally: created out of nothing as no currency is linked to any independent source of value such as gold. Furthermore, no bank anywhere in the world exists except for the consent of a national government. So to take Fintan's point that "governments, whether they like it or not, are the ultimate guarantors of the financial system that in turn drives the entire economy", I would simply add: you don't go far enough Fintan. You see: Governments are not just mere guarantors of the financial system - they own it.

As for the second mistake - we are now experiencing a swing of the financial pendulum back to the left of the political spectrum. Hence the calls for more regulation etc. My only comment on that is: who regulates the regulators? Is it possible that we have had a regulatory failure in so many countries on account of the inevitable fact that it is government that runs the regulators - not free enterprise? And that the politicians who comprise government will always be driven by their ambitions for political power without necessarily worrying about the wider implications.

I hope we will see a change in perspective by the Archbishop and his contemporaries as the present crisis unfolds. The issue is not one of regulation and state control, it is actually about something that the Archbishop is well placed to comment on, namely: moral behaviour. As one free market supporting, Catholic think tank remarked recently:

Unfortunately, those who advocate for a larger role for government in our daily lives will be able to point to the Crisis of 2008 as "exhibit A" for why we should not be left alone to pursue our own best interests. However, this criticism misses a critical assumption that we make when advocating a free-market economy - it requires a virtuous people who are willing to assume personal responsibility for their actions. Without right behavior, liberty quickly descends into license.

So let's stop generalising from the irresponsible greed and stupidity of a few, and focus on ensuring the ongoing contribution of the ethical majority. If anything, setting up and expanding a business in the current climate is going to take a great deal of moral courage. I hope the Archbishop can be counted on to provide all the encouragement necessary.
Posted by Gerard O'Neill at Wednesday, October 01, 2008