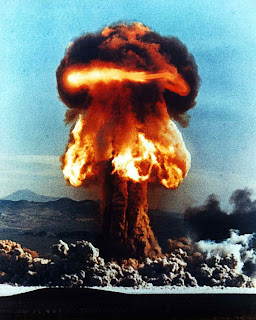 In the movie Independence Day the President is forced by the defeat of US conventional forces to go nuclear - and thereby launch a nuclear attack on an alien space craft on US soil. It feels a bit like that at the moment with all the talk about a co-ordinated cut in interest rates by the world's central banks, including the Federal Reserve, ECB, Bank of England and Bank of Japan. Perhaps even later this week as some commentators are speculating ...

At this point all options are on the table. The negative turn in the markets after last week's bailout in the United States suggests that other options have to be considered - and soon. Indeed, the $700 billion rescue package in the US may yet come unstuck as its original three pages of focused simplicity morphed over two weeks into a hideous 451 page bandwagon of the worst excesses of pork barrel politics. The Bailout of Abominations as Robert Higgs has called.

At least our own policy makers were more concise with their rescue of Irish banks last week - just 10 pages make up the Credit Institutions (Financial Support) Bill 2008 (pdf). One of the most interesting clauses to my mind is 6(9) on page 5:

The Minister may subscribe for, take an allotment of or purchase shares and any other securities in a credit institution or subsidiary to which financial support is provided under this section on such terms as the Minister sees fit.

In other words, he has the option to take a share (up to 100%?) in the banks on his terms and at his discretion at any stage in the next 2 years. Boy the banks must have been in a bad place to agree to that ...

But will it work? That's the €400 billion question of course. Mind you, our own difficulties are small stuff compared to the nuclear option about to be implemented by the world's central banks. Let's hope it works. Though I seem to recall it didn't in the movie. Better have Will Smith on speed dial, just in case.
Posted by Gerard O'Neill at Tuesday, October 07, 2008