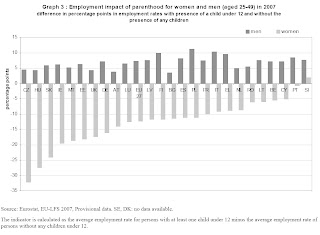 Does Europe hate its children? I wondered this when I read the latest European Commission report on childcare in Europe. The report follows on from the Roadmap for Equality between Women and Men (2006-10), in which the Commission undertook to "support the achievement of the Barcelona targets on childcare facilities". So what are the targets? As the childcare study summarises it "the 2002 Barcelona objectives are essentially concerned with promoting access to employment and enabling parents, particularly women, to remain in employment, thus supporting gender equality".

The welfare of the children is assumed to derive from this objective (higher family incomes/less poverty) but it is clearly not the main objective. Ireland does not fare well in the study, and the implication in the analysis - as shown in the chart - is that Irish mothers pre-school age children are substantially less likely to be employed than their counterparts elsewhere. Ireland is closer to the UK in that regard, though not entirely.

One major difference from the UK, I suspect, is that we have not yet fallen victim to what has been called Fertility Correctness. In a fascinating essay (pdf) for Civitas by Colin Brazier, the writer notes the growing anti-large family bias now emerging and the consequence fall in 'sibship', i.e.: the experience of having brothers and/or sisters:

Familial relativism has parallels with cultural relativism. The drift towards low sibship as an expression of ‘fertility-correctness’ is perpetuated and augmented by fashion. The power of the norm is highly seductive for parents who want to experience parenting without enduring a decades long ‘parenting emergency’. Some developed countries now, arguably, have a one-child policy by example, not compulsion.

There might even be similarities with multiculturalism. True egalitarianism is vexingly difficult to achieve; witness the current woes of the white working class. Equally, the pretence that no family size is more equal than another is precarious. Population politics are a zero-sum game: a dominant one-child philosophy is emerging, to the effective disadvantage of the old favourite.

As Brazier concludes, fertility correctness is really a war on the middle-classes:

Choice has become increasingly Hobsonian for middle-income earners. The only child—once pitiable—is now fashionable. A growing canon of work exists to justify the decision to restrict family size in the interests of the environment or career. Respectable authors sidestep a substantial body of evidence to argue that only children suffer no material disadvantage by dint of their solitary status. In place of the large family they cannot have or do not want, parents of singletons incorporate nephews, nieces, Godchildren, and the children of friends into the ‘analogue family’ unit. Those denying that children of low sibship are in any way disadvantaged are the intellectual midwives to a new demographic order: ‘A world never before inhabited: a world in which the only biological relatives for many people—perhaps most
people—will be ancestors.’

Which makes me wonder about targets for childcare for pre-school age children. We need to get serious about the wellbeing of our children, not least because half of all the variance in lifetime income between people is determined by age 18. But that doesn't necessarily mean increased participation in the workforce for mothers of pre-school age children. An alternative solution is to take the €2.5 billion spent this year alone on Child Benefit and focus it entirely on married couples with pre-school age children where either parent has had to give up employment.

That way you remove the need for state-funded childcare facilities; incentivise parents to have larger families than they could otherwise afford; reinforce the strength of family life; ensure our population continues to grow; and reduce income inequality in the long term. A pretty compelling case I would have thought - and one where an Irish solution to an Irish problem might actually be a good thing for a change.
Posted by Gerard O'Neill at Monday, October 06, 2008