Power to the Undecideds 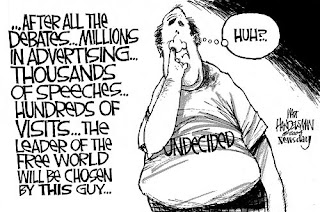 The New York Times carries a great article today about that bane of all political pollsters: the undecided voter. With the polls so close in the US election campaign at present, the 'Undecideds' could swing the final outcome one way or another.

I've been involved in many opinion polls over the years and you usually only have a few options as to how to treat the undecided respondents when reporting the results:

a) ignore them and just assume they won't vote
b) include them, but allocate them pro-rata to the Decideds
c) as with b), just adjust for what people with the same demographics intend voting
d) use their previous voting behaviour to predict their future behaviour (assuming they remember how they voted before ...)
e) some combination of all of the above

Fortunately behavioural economics and neuroscience is starting to shed a bit more light on the minds and indecisiveness of the Undecideds, according to the New York Times. Though it may be too late for the US Presidential Election, perhaps we'll get to play with a few EEG-connected voters in the run up to the next Irish election ... ;-)
Posted by Gerard O'Neill at Tuesday, October 28, 2008