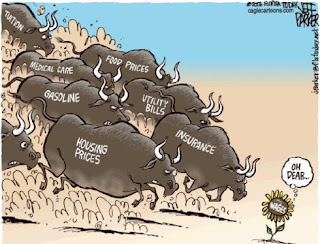 A friend told me she was in a well-known department store in Dublin recently and at a number of counters - when she showed some interest in buying - she was quietly informed that there was a special '40% off everything' sale on that day. They just weren't advertising it ...

I suspect there's a lot more price cutting going on than is obvious - and not just in the supermarkets and discounters. Some of it is starting to show up in the CSO's inflation measures: furniture, clothing, electrical goods, some food items and some services are showing year-on-year price falls. But the overall inflation rate is still positive (4.3% in September).

I suspect however we are only at the start of a massive price reversal: with falling oil and commodity prices just some of the indicators of the coming deflation. Recent forecasts for Irish inflation from a variety of sources all assume inflation falling sharply to just 2-3% next year: and perhaps even further to 0-1% in 2010. The justification for such a projection is straightforward enough:

But could it go further? Could we witness falling prices - not just lower rates of price increases - over the next few years? We already are in certain sectors, as already noted. But could deflation become an economy-wide phenomenon? Some commentators are beginning to think so. Among them is Nouriel Roubini, or Dr Doom as he is 'affectionately' known. Credited as the man who saw the credit crunch coming, Roubini is now explicitly forecasting deflation in the United States, and by extension in many of its trading partners. Indeed, some financial indices in the United States are already indicating deflation - for the first time ever in the case of some measures.

So what will deflation mean for Ireland? For consumers in the short run it can only be a good thing: a fall in prices is equivalent to a rise in disposable incomes - other things being equal. And the supermarkets are doing their bit to lead the deflationary charge. But for businesses deflation can be a nightmare. Especially those that are highly leveraged through borrowings. Though some costs may fall, not all fall or fall very slowly, e.g.: wages. And nominal interest rates can't fall below zero: so there is a floor beneath which debt repayments don't fall. While on the other hand consumers may be looking for bargains and special offers (expect more haggling at shop counters is one forecast I feel confident about), service businesses especially (i.e.: most of us) will struggle to respond.

But Roubini doesn't expect it to last indefinitely - just 18-24 months before the longer term trend in upward pressure on commodity prices in particular returns. That's still a long time to wait if you're facing falling prices and falling demand for your products and services. Probably too long for some businesses - their failure will be the inevitable fall out from any ordinary recession. Only this one isn't/won't be the least ordinary.
Posted by Gerard O'Neill at Tuesday, October 28, 2008