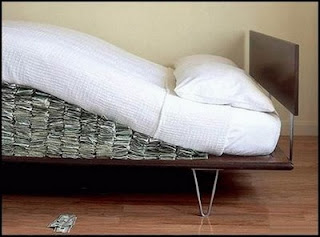 The public's reaction to the infamous Joe Duffy broadcast a few weeks back, the one that so upset the Minister for Finance, was a clear indication of seriously we take savings in Ireland. As I've noted before, we already have one of the highest savings ratios in the OECD - and, if anything, it's going to get a lot higher.

But maybe we take savings too seriously? In the United States they are already beginning to worry that consumers' rush to save (or reduce their debts) is exacerbating an already severe downturn, reducing consumer spending when the economy can least afford it. Could it happen here? Perhaps. Consumer spending equals 70% of US GDP versus 55% here: so the US is clearly more vulnerable to a downturn in consumer spending. Nevertheless, the recent economic forecast from Goodbody Stockbrokers shows a sharp decline in Irish consumer spending next year (-3%), driven, in part, by a rising savings ratio.

Such a reaction is normal and foreseeable of course - and self-correcting over time. But more worrying are some of the ideas currently being stitched into the Irish Government's Guarantee Scheme for the banks, expected to be implemented later this week. Take, for example, the proposed conditions (clause 36 in the draft pdf on the Department of Finance's website) in relation to how much money banks covered by the scheme can lend:

In particular the Regulatory Authority in consultation with the Minister shall monitor and review the expansion of the activities of covered institutions benefiting from the guarantee in order to ensure that their aggregate growth in balance sheet volume is not excessive and does not in any event exceed:

36.1 the annual rate of growth of Irish nominal GDP in the preceding year; or

36.2 the average annual historical growth in their balance sheets of Irish credit institutions during the period 1987-2007; or

36.3 the average growth rate of the balance sheet volumes in the credit institution
sector in the EU in the preceding six months,

whichever is the higher. In case of any breach of this obligation, the Regulatory Authority shall adopt, within four weeks, appropriate measures to restore the situation and inform the European Commission thereof.

Sounds like a lot of micro-management to me: and worse, a possible constraint on bank lending capacities as the economy starts to pick up towards the end of the two year period of the scheme. I'm no monetary economist but I worry about the ability of regulators to determine the lending capacity of financial institutions - they haven't done a great job so far.

I hope I'm wrong, but I can foresee a dangerous deflationary scenario developing whereby consumers aren't spending and banks aren't lending just as we need both to get economic growth back on track going into 2010. We might just get all those rainy days we're saving for ...
Posted by Gerard O'Neill at Tuesday, October 21, 2008