This Way to Utopia 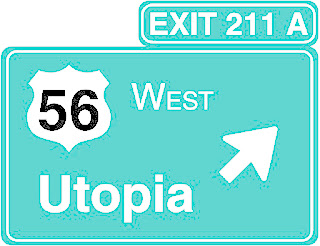 The New Scientist has done us a big favour this week by showing us the way to Utopia, and away from all the talk of recession and depression now gripping the headlines. The wise stewards who will lead us to Utopia will be, surprise surprise, scientists - in particular, ecologists. This week's issue is dedicated to the theme of How Our Economy is Killing the Earth: probably not quite the issue-du-jour right now but you have to credit for them for trying ...

Theirs is a green version of the socialist schadenfreude more common among the Irish commentariat. Though the NS version starts with the same premise - modern capitalism is more a curse than a blessing and just can't go on as evident in the current crisis - it nevertheless goes somewhere rather different to where the Lefties would likely want to end up. Or most everyone else for that matter. But in fairness to the New Scientist they do actually have a go at painting a picture of Utopia - or Life in a Land without Growth. Here are just few highlights:

In our society, scientists set the rules. They work out what levels of consumption and emission are sustainable - and if they're not sure they work out a cautious estimate ...

We are gradually redistributing resources by setting upper limits for income inequality. It was tricky deciding what the permitted range of incomes should be - one that rewards real differences and contributions rather than just multiplying privilege. ... As a first step, we are aiming to lower the overall range to a factor of 100 ... Eventually, we may try to bring this down to a factor of 30.

We are gradually raising the percentage of money deposited that banks are required to keep in reserve. As a result, commercial lending is declining - banks get their income by financial intermediation and service charges instead - and we are moving to a culture in which you have to save money before you can lend or invest it.

Without as much economic growth as before, we can't maintain full employment - but then, our old growth economy wasn't so good at doing that either. Instead, people work part time, generally as a co-owner of a business rather than as an employee. The whole pace of life is more relaxed. Incomes are lower but we are rich in something that many of us had never experienced before: time.

Completely free trade isn't feasible any more, of course, because we have to count many costs to the environment and the future that foreign firms in growth economies are allowed to ignore.

One of the toughest issues, politically, has been population. We know that we will have to stabilise our population - and that includes immigration rates as well as birth rate.

They kindly spare us the details of what will happen to those who object to this state of affairs: sustainable concentration camps perhaps? Still, I do admire their willingness to publish this stuff, and I don't doubt the genuiness of their intentions. Which is the scary bit really. As science fiction-type images of the future go, the New Scientist version is not much different to that brilliantly portrayed in Ira Levin's novel This Perfect Day. Think of it as a sort of kinder, gentler fascism.

One of the contributors to the special issue of the New Scientist is Andrew Simms - a regular contributor to the Guardian and policy director at the New Economic Foundation. For a sense of where current 'new economic' thinking is going you just have to read his piece in today's Observer on how it is possible to design an economic system that is not dependent on the invisible hand. One idea is to get local authorities to make local businesses dedicated 10% of their staff's time to helping the local community. Notice how there's never any choice in these utopia's they are so keen for us to join them in?

What's maybe more surprising than the fascist undertones of the new economic agenda is their lack of originality. As Jonathan Wolff reminds us in a fascinating interview over at Philosophy Bites, Karl Marx speculated about a world in which labour was no longer alienated. Frankly it sounds a lot more fun than what the New Scientist has in mind for us. Though no disrespect to Dr Marx or Mr Simms I'd really prefer to just make my own choices about what future I want - if you don't mind.

Here in Ireland our own Greens are showing a lot more common sense than their counterparts elsewhere. Being in government probably does that to you I guess. One sign: green advocate John Gibbons writing in the Irish Times last week suggesting that maybe we need to reconsider the nuclear option. Welcome to the club John! And let's leave utopia where it belongs: in the science fiction section of our local book shops.
Posted by Gerard O'Neill at Sunday, October 19, 2008