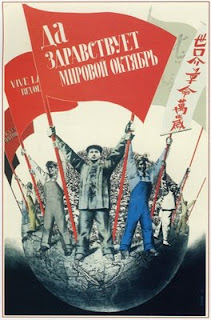 It's going to take a while for me to get used to calling my bank manager 'Comrade'. Around the world the state has nationalised the commanding heights of financial capitalism - in effect a remarkably bloodless communist revolution. Depending on your definition of communism of course. Or revolution for that matter.

Naturally this has been greeted with delight by those on the Left. Paul Gillespie treats us to a classic example of socialist schadenfreude as he reports in today's Irish Times that sales of Marx's Das Capital are soaring in Germany. Gillespie suggests that the current crisis is "a real challenge and also an opportunity for the left - just as it was for Marx and Engels 150 years ago."

His analysis, and much else published in recent weeks, amounts to nothing more than Apocalyptic Marxism: a sad parody of Marx's original thinking, more akin to Book of Revelations end-of-days fantasy than real indepth analysis. Marx as Nostradamus - who'd have thought it?

Brendan O'Neill recently set out a far more considered assessment of whether we have seen the belated triumph of 'Financial Marxism'. He derides Cappuccino Socialists like Paul, observing that:

One reason why sections of the cultural elite (Jenkins labels them ‘Guardian writers and Labour politicians’) can take pleasure in the credit crunch is because this is a ‘safe’ capitalist crisis: there’s no organised or revolutionary working class seeking to overthrow the capitalist system and replace it with something else, only the disorientation of the capitalist elite itself. You can bet a banker’s bonus that these observers would not be chortling into their cappuccinos if there were a serious challenge to capitalism. Indeed, the ‘Marxism’ that some of these bloody pinko liberals have embraced in response to the credit crunch is one entirely denuded of its subjective, ideas-based, history-making element, and transformed instead into a deterministic creed in which things inevitably collapse as the besuited, benighted opinion-forming classes look on and laugh.

Which captures in a nutshell my problem with a lot of what passes for an Irish socialist critique of the current crisis: it's usually written by people employed by media organisations (e.g.: Irish Times, RTE) that are crucially dependent on the advertising spending of the capitalists they derided to pay the same commentators' salaries. Hand-bite-feed. As O'Neill puts it: theirs is a form of 'droolism' rather than anything deeper.

The real issue, of course, is the role of the state: both in causing the current crisis and in solving it. Socialists major on the latter, trumpeting how the state had to come to the rescue of free market capitalism. I agree - the state has rescued a version of capitalism: but I take serious issue with describing the status quo ante to this crisis as 'free market'. Take the role of the politicians in priming the pump of excess in the United States. As noted by the Catholic-leaning Acton Institute:

Something more was at work in the present crisis, a crisis of unprecedented scope. Why didn’t profit-minded loan companies run thorough credit checks? Why did they keep pumping out low interest loans to high risk borrowers, ignoring the risks? It’s as if somebody spiked the financial system’s punch bowl with stupid juice, driving normally prudent financiers to dash, en masse, over the cliff. It seems that way because it is that way. The brewers of the stupid juice were largely (if not exclusively) politicians in Washington who sought to redistribute wealth from the rich and middle class to poor people with bad credit. These politicians fostered various laws and institutions that directed, cajoled and legally bullied mortgage companies to extend big loans to people with little credit.

Or take this analysis from the Wall Street Journal which asks why the regulators encouraged investment banks to take on far greater risks than was wise in hindsight (remember - regulators are the state):

One fair question is how such regulation could have allowed Wall Street to employ so much more debt than the commercial banks. Part of the answer is that, instead of a fixed capital ratio standard, Basel II uses mathematical models crunching historical data to determine how risky an institution's assets are and therefore how much capital it needs. For this reason, when the investment banks switched to Basel II in the middle of a housing boom, AAA-rated mortgage-backed securities appeared almost as safe as cash. Oops. The models allowed Wall Street to add too much leverage. By the same token, because risk models will now look back and see several awful years of default rates, they may force banks to be overly cautious.

Nevertheless, it seems clear that the momentum behind even greater state intervention in the economy looks likely to gather pace rather than reverse. The 1980s saw the de-politicisation of economics throughout the Western World - the consensus was that governments should regulate not manipulate the markets. But now we are seeing the re-politicisation of economics (witness the reaction here in Ireland to the Budget last week). While this will be welcome by some, the consequences are, sadly, inevitable in terms of worse outcomes. As Frank Ferudi notes: